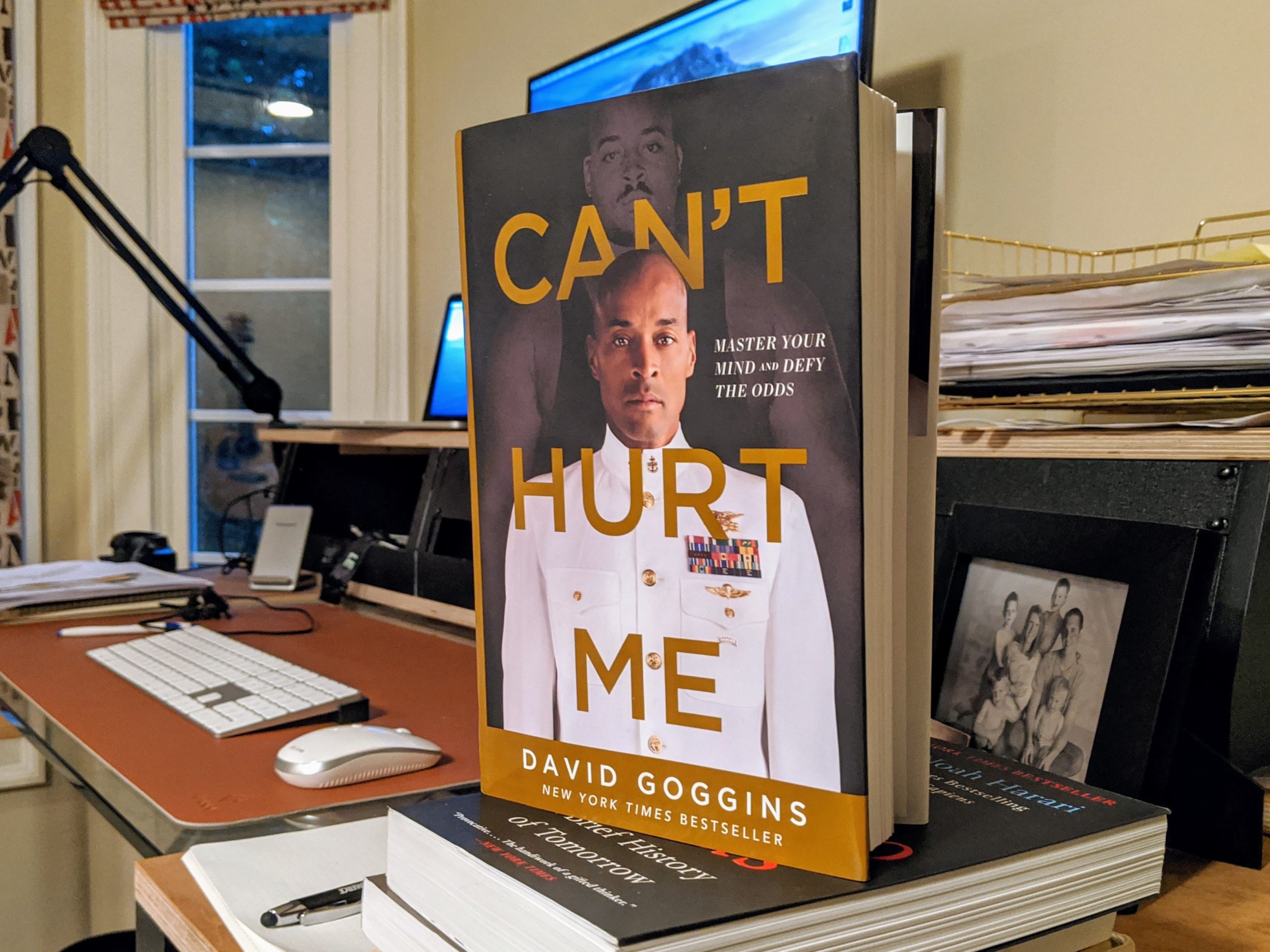 Last week, while on vacation, I read Can’t Hurt Me by David Goggins. Goggins is a retired decorated Navy Seal and endurance athlete. At one time, he held the world record for most pull-ups completed in 24-hours (4,030) and he’s also completed dozens of ultramarathons.

The book is part memoir and part how-to manual for raising the bar and achieving greater levels of excellence in any area of your life by gaining mastery over your mind and body.

Goggins’ life started out hard. Violence and disappointment seem to have been the only constants in his childhood. He eventually joined the Navy but left after just a couple of years due to some health complications and ended up working in pest control. Eventually, he was inspired to join the Navy Seals–a decision which lead him to completely upend his life and drop over 100 lbs in three months.

It wasn’t smooth sailing. Far from it.

It took Goggins three tries to make it all the way through BUD/S (the hardcore Navy Seal equivalent of boot camp). But that process was the beginning of Goggins remaking himself from a relatively average guy into an absolutely relentless machine, intentionally seeking out punishment and pain with the goal of mastering his mind and body.

The book is a memoire that follows Goggins’ life, from his childhood in Brazil, Indiana, to his retirement from the Navy Seals, to his current work as an endurance athlete and motivational speaker.

In the book, Goggins also outlines the strategies that he applied in becoming such a hard-driving individual and invites the reader to apply those same strategies to the challenges in their own lives, whether those challenges are athletic, professional, or personal in nature.

The book was unbelievably inspiring.

9 times out of 10, someone emerging from Goggins’ childhood will not be a success story at age 45. Goggins is that 1 out of 10 that made it out by using the hardships in his life as fuel to become stronger.

I found that a lot of the principles and practices Goggins suggests are closely aligned to concepts I’ve read about in mainline business and professional development texts, which means the lessons Goggins imparts are going to land with a crowd that would never pick up a book by Cal Newport even though he teaches some of the same fundamental principles.

For example, Challenge #8 at the end of Chapter 8, about scheduling your day into intentional focused blocks is basically a simplified application of some of the same principles Cal Newport talks about in Deep Work and So Good They Can’t Ignore You.

That’s not a knock on either of those guys in any way. Cal Newport is one of my favorite authors, and Goggins’ books was fantastic. The point is that Goggins’ book is going to land these concepts with readers that would never considering reading something written by a Computer Science professor from Georgetown University.

Goggins, if you read this: there’s nothing I disliked about the book. It was all fantastic. Good on ya, buddy.

If I have one gripe with the book it’s that Goggins’ boasting about his accomplishments is a little over the top.

I get it. Your childhood was horrible and you used that to make yourself into the baddest man to walk the planet. You did it all by yourself. You didn’t need anyone else. And you showed no weakness.

The bragging is so over the top that while you’re reading you almost have to think that some of it is bull. But then, sprinkled throughout the book, Goggins drops in pictures of commendations he received from various training’s he attended or for his participation in various and sundry military activities. When you see those you realize that he has some actual hardware and paperwork to backup his claims.

I have no idea if every single word in Goggins’ book is literally true. The tone makes me think that the truth might be stretched or played to his advantage from time to time.

That doesn’t take anything away from the story. I think it’s part of his persona, and a part of what makes the book work. It’s all a package deal. So to call this What I Disliked About the Book is a bit strong. I think it was probably a necessary part of the total package, but it did rub me the wrong way a few times and I have to wonder if everyone Goggins portrays in an unflattering light would agree with his portrayal.

It does also bear mentioning that the word “fuck” appears more in this book than I would have thought possible. The use isn’t crass. Here’s a typical example from page 138:

…but for those of us knuckle draggers still in the mix, our attitude was, So the fuck be it!

I’m not fazed by swearing and I like getting into Goggins’ head as I read the book and the raw language helps with that. However, if you are considering picking it up and are turned off by profanity, maybe pick up the clean version.

I thoroughly enjoyed Can’t Hurt Me by David Goggins.

I was inspired to face certain specific challenges head-on and engage more intentionally in maintaining a positive mindset. I was also inspired to up my game in my exercise regimen.

If you’re someone who strives to master your mind, I highly recommend Can’t Hurt Me as a case study in the measures one man took to master his own mind and achieve uncommon levels of excellence.