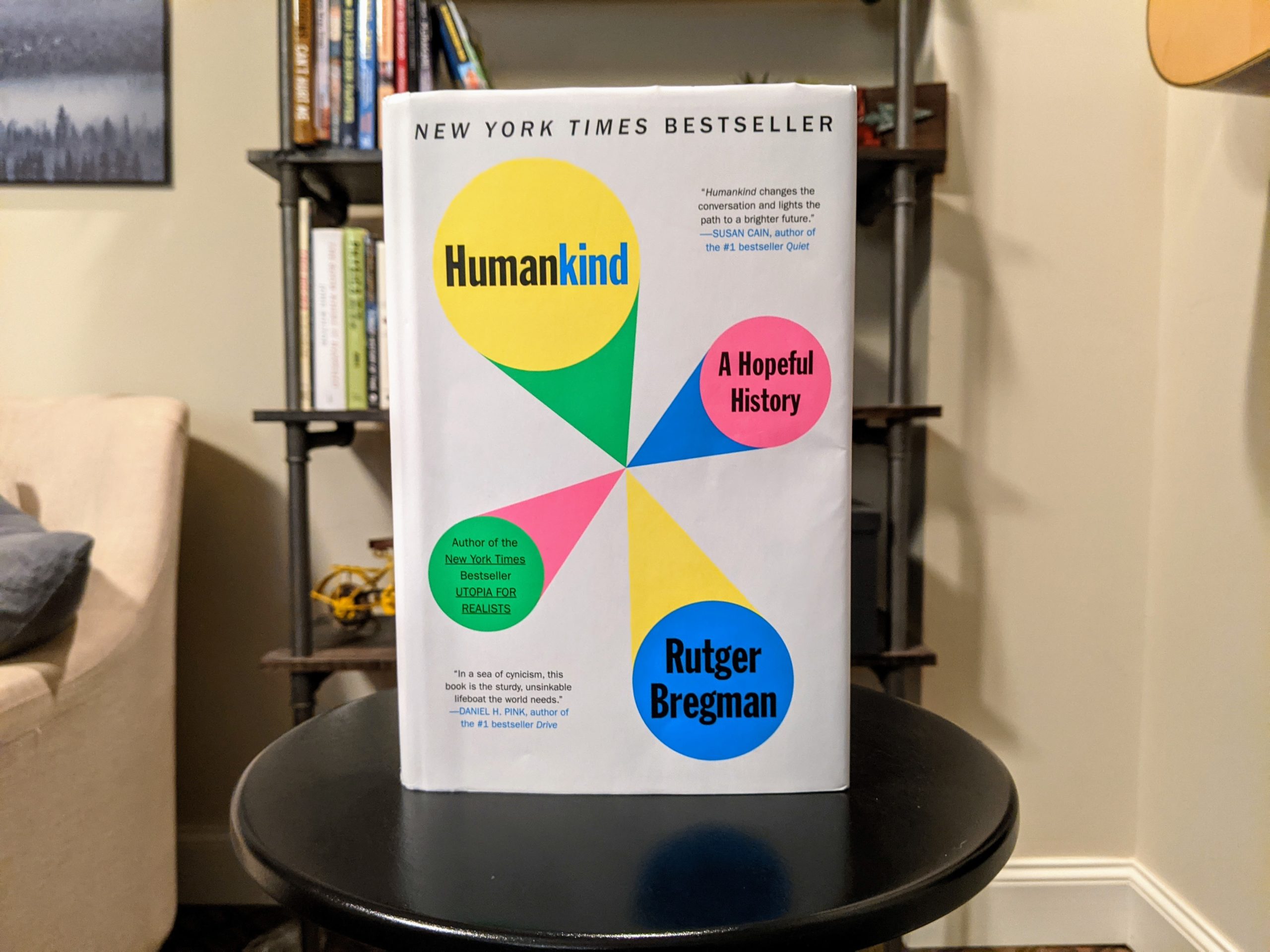 Everything you think you know about human nature is wrong.

Many people believe that humans are intrinsically selfish anarchists bent on satisfying their base desires at any expense, and it’s only the pressure of social norms, the need to survive, and the threat of violence wielded by authority that compel us to behave ourselves.

But, what if that sort of thinking is wrong?

A rebuttal of the idea that humans are primarily selfish is the central premise of Humankind: A Hopeful History by Rutger Bregman. Instead, Bregman claims that humans are actually kind and generous by nature, and this idea, if it could be internalized by every human, could have the power to fix much of what ails modern civilization.

Most of us are raised with the idea that we’re broken or sinful by nature. We get this idea from different places: our parents, religion, society at large. The idea many of us are raised with is that humans are fundamentally selfish and that it’s only the imposition of rules, laws, religion, norms, social expectations, and civilization that have the potential to corral our destructive nature.

This idea goes by the name veneer theory in Bregman’s book, a term he borrows from Frans de Waal. In a nutshell, veneer theory says that civilization, with it’s laws, rules, and norms, is a thin veneer that hides humanity’s natural inclination towards anarchy, selfishness, and impulsivity.

However, Bregman believes that most people are fundamentally good and in Humankind he spends 400 pages putting forth evidence that supports his idea.

One Bite (or Study) at a Time

There’s an old saying that goes like this: “How do you eat an elephant? One bite at a time.”

Big things are not done all at once. You have to take things one small step at a time. In the same vein, how do you rebuff centuries of psychology, biology, history, and philosophy? One story and one study at a time.

In Humankind, Bregman recognizes that he’s sailing in choppy waters under heavy headwinds. The idea that humans are fundamentally good is tough idea to sell when faced with so much apparent and obvious contradictory evidence. Have you read the news lately?

So Bregman doesn’t take the whole idea on at once. Instead, Bregman walks through the most well-known studies, ideas, and stories of our time that are often cited as demonstrations of humanities worst qualities and unveils how these stories and studies are flawed or outright fabrications.

Among many other stories, studies, and ideas, Bregman goes after the Stanford Prison Experiments, the supposed savage history of Easter Island, and the Lord of the Flies. In each case, Bregman demonstrates how the study was flawed or the story misreported, and how reality was considerably different than the fiction put forward.

Is the story of Easter Island one of violence, war, and savagery? No. Once you separate the influence of European explorers and divide history from mythology, Easter Island appears to be have been a peaceful and cooperative community.

Is the Lord of the Flies a realistic depiction of what happens when school-age kids are left to their own devices? Absolutely not, and we know this because a group of Tongan school-age boys were marooned on the island of ‘Ata for 15 months, and their real life Lord of the Flies story inspires hope, not despair.

Over the course of 18 chapters, Bregman deconstructs the idea that people are fundamentally selfish and replaces that tired trope with a more realistic assessment of human nature.

It’s Not All Roses and Rainbows

At this point you might think that Bregman has his head stuck in the sand, but that isn’t the case. Bregman isn’t confused about the horror of the holocaust or the reality of violent crime. Bregman isn’t suggesting that humans are completely good and without fault.

Instead, the picture that emerges is one where people sometimes do terrible things. However, more often than not, these terrible things are rooted in honorable motivations.

Let’s look at a more recent event: the January 6, 2021 siege of the US Capitol by supporters of President Trump. Did those who marched do so because of their hate for the United States and democracy? Absolutely not! They marched for precisely the opposite reason: they believe in freedom and democracy, they love their country, they’re convinced that democracy has been stolen from them, and they’ve been encouraged by leaders they trust to take violent action to protect their values. In short, they’ve been lied to and mislead, but have done a terrible thing while motivated by a love of country and belief that they were fighting to protect democracy. These are terrible things done for honorable reasons.

It is also the case that what is true of most people is not true of all people. Consider the Christmas truce of 1914, in which World War I soldiers on both sides of the conflict spontaneously laid down their weapons and celebrated Christmas across enemy lines. While fighting stopped in most places during Christmas of 1914, not everyone was pleased, such as the young soldier by the name Adolf Hitler who pronounced that “Such things should not happen in wartime.”1 Most soldiers were fundamentally good and driven by honorable motivations, but not all.

Humans are complex. Fundamentally good? Yes, for the most part. However, there are some bad apples in the barrel, and even good people are capable of doing terrible things for honorable reasons when they’ve been carried away by groupthink, misinformation, poisonous beliefs, or allegiance to authority.

Humans are good, for the most part, but we do harmful things because the world is complex and because our sociability overrides our better natures.

How should that affect how we live, think, and behave?

In the epilogue to Humankind, Bergman makes ten suggestions that are based on the ideas in the book. I can’t do justice to these ideas in this short review so I’ll summarize what I took away from the book in one paragraph:

Those who you perceive to be different from you are not evil and are a lot more like you than you may think. If you can step across the aisle and physically engage your adversary in one-on-one real life conversations, assume the best about them, and get to know them as individuals, far more often than not you will find a friend where you previously found a foe.

What About the Book

Something I haven’t done in this review is talk about the merits of the book itself. So let me do that briefly.