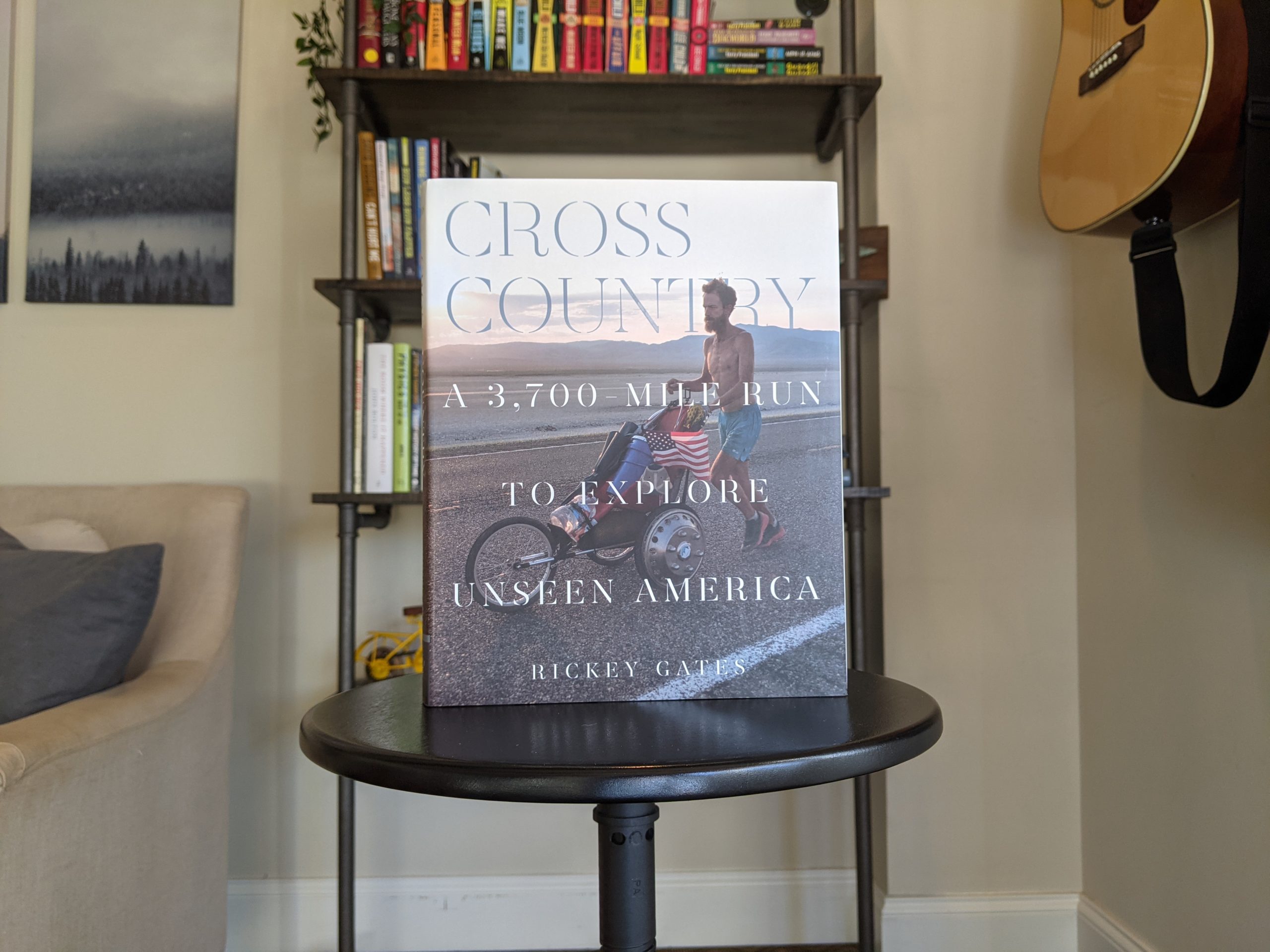 A few months ago, I was on my exercise bike, browsing YouTube to keep myself entertained, and I stumbled on a documentary about Rickey Gates, who traveled across America, on foot, in 2017.

Rickey wasn’t trying to break any sort of record and he didn’t even travel the entire distance by foot – there was a stretch in Tennessee that he traveled by paddle board. Instead, Rickey tackled the project out of a desire to get to know his country a little better.

Just a few days ago, I was browsing Amazon and stumbled on Cross Country, Rickey’s book that covers the same story. For some reason, it was marked down to a low price which I couldn’t resist, so even though I already knew the story I picked it up.

The book was delivered Monday morning. Monday evening at about 6 PM I cracked it open. By about 11 PM I had finished the book, and I even ate dinner and helped my daughter get ready for bed in that time as well.

The book tells the same story in a different format. The story is sparse, but poetically written, and most of the book consists of pictures from Rickey’s trip and short stories and biographies of the people and places he met and saw along the way.

What is the Book About?

The book tells the story of Rickey’s trip across the country, but that makes it sound like a travel diary. That’s not it at all.

While the book does touch on logistics and the challenge of crossing the country on foot, the majority is dedicated to the people and places Rickey passes by. This is a book about Rickey getting to know the parts of the country that he knows the least – mainly the deep south and Appalachia, which are the places I personally know best.

The way I read the situation, Rickey was trying to figure out what we all try to figure out from time to time: what’s next. He was, in his own words, “thirty-six years old, aging out of a niche sport, where (he) was barely making enough money to pay (his) half of the rent.” To compound issues, the story takes place after Trump’s win in 2016 (which was a surprise if you aren’t from the south, but was no surprise to most of us deep in the heart of the south), and as someone who leans left, Rickey found himself feeling lost, both as a person and as an American.

Now, this is just my take, but I think this trip was about Rickey trying to get to know the parts of America that voted red and also about leaning into his chosen vocation in a new way as he tries to figure out how a professional runner remains relevant as age catches up to him.

Rickey’s route took him through the American heartland and connected the world he didn’t know – the world of deer hunting and undying support for Trump – to the world he did know in Colorado and California. More importantly, his route connected these two places in a single unbroken line, demonstrating that the distance between us really isn’t that far. Hell, you can cross it on foot.

Transamericana tells this story in 75 minutes on YouTube. Cross Country: A 3,700-Mile Run to Explore Unseen America explores the same story in 256 pages of stories and photographs.

Why I Read the Book

I was deeply moved by the film Transamericana. So when I saw Cross Country available at a great price, I picked it up without a second thought. I can’t really put my finger on what it was about the story exactly that moved me, but I’ll give it a shot.

Deep down, I think there are two types of people in the world:

I’m firmly in the second camp. Why is that? Why am I a little jealous of Rickey while also happy to acknowledge that I’ll never attempt something like that?

What Rickey did appeals to me because it was firmly connected to reality.

So much of modern life is disconnected from reality.

Now, strap on a pair of running shoes and go slog 20 miles up and down mountains in near-freezing temps while the wind is whipping and the rain is falling. Or go cover 5 fast miles without the cover of shade when it’s 90 degrees out and humid.

There is a stark contrast between running – at least the way I do it: outside, in all weather conditions, and in the woods whenever possible – and modern life. When I run I feel the distance between my personal experience and physical reality shrink, and I feel like I am part of the world, not protected, cushioned, and distant from it.

I like modern life. I’m not proposing a return to our hunter-gatherer days. But running until I’m spent, out alone in the woods, is a way of experiencing reality in an unfiltered way.

Rickey’s trip took the separation between modern man and the physical world and nearly removed it entirely. For five months Rickey was outside, covering the ground under his own power, in all types of conditions, and even sleeping outside much of the time. And in that condition he met Americans of all stripes and enjoyed the kindness and help of strangers of every possible personal and political persuasion.

I don’t think I’ll ever strip away modern life to the extent that Rickey did, but I’m inspired by his story to get outside even if it’s well below freezing or scorching hot; to run in the rain, wind, or snow; and to get to know those around me without judging or looking down on them. After all, the distance between us is just not that far. Hell, you can cross it on foot.