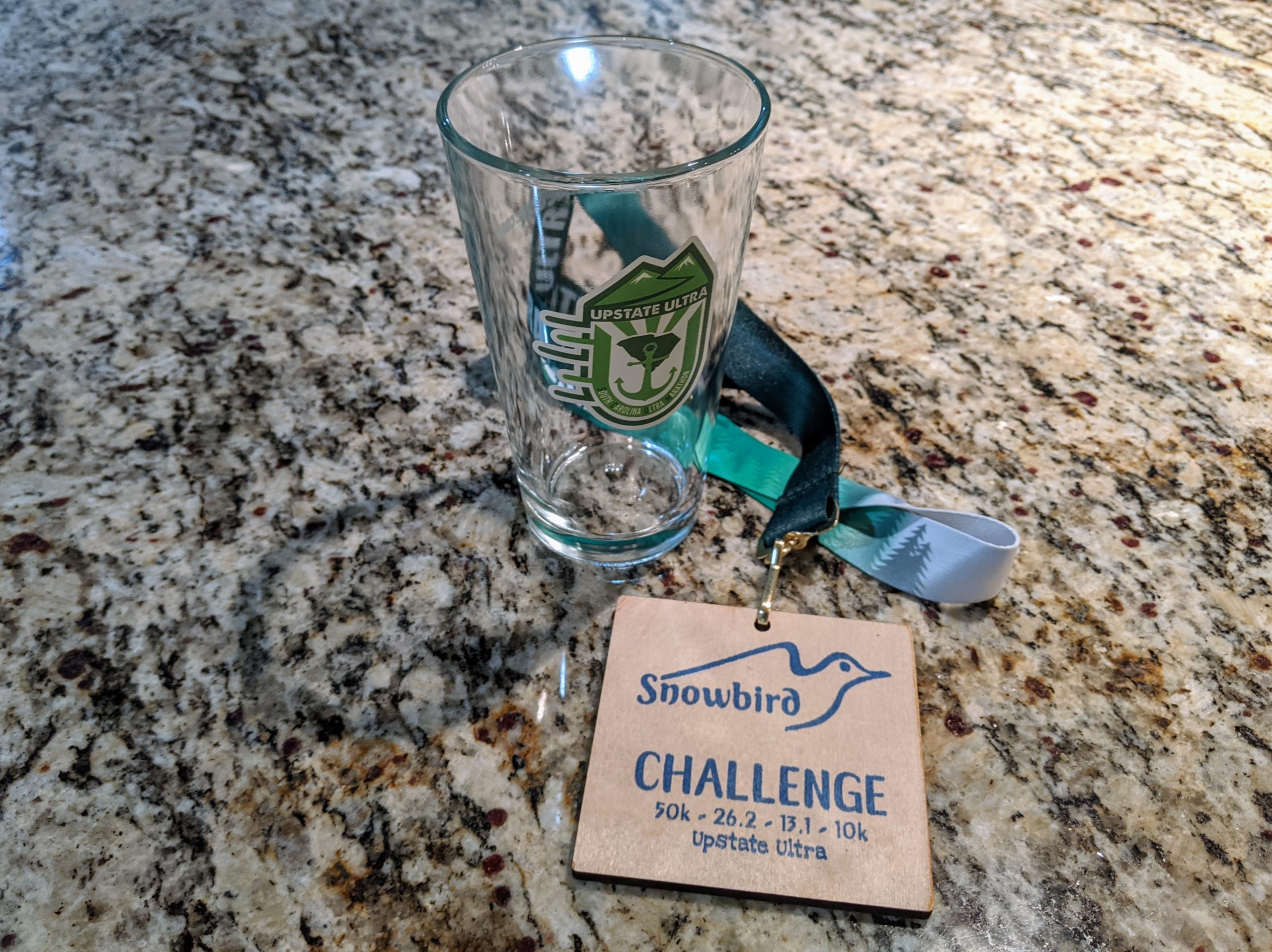 This past Saturday I laced up my Hoka’s for the Snowbird Challenge 50k race. This was my first ever 50k – actually, the longest race I’ve ever completed before was the Lady of the Lake 4 hr race in which I ran 21 miles, so this race was my longest race by about 10 miles.

I think the Snowbird Challenge made for an ideal first 50k for two reasons: the weather was perfect and the format of the race provided plenty of built-in rest breaks.

Saturday morning was cool. It was right around freezing when I pulled into Seneca, SC at 8 AM and had warmed to just above freezing by the time the race started at 9 AM. The warmest point of the day was in the low-to-mid 50’s, and the entire day offered clear skies, sun, and mild breeze. You couldn’t ask for better running weather.

Another interesting twist is that not everyone was running a 50k. There were also folks completing marathon, half-marathon, and 10k distances (10 laps, 5 laps, and 2 laps respectively). So as the day went along more and more folks joined until the entire group was there for the last 2 laps.

The result of this format is that everyone ended up with a break between laps. In my case, I generally ran laps between 24-25 minutes, meaning I had 20 minutes to rest between laps. That was plenty of time to take a quick bathroom break if I needed one, get some water, swallow a few bites to eat, and rest my legs and feet for a few minutes before starting back up.

How Did It Go

I’m really pleased with how the race went. My lap times for the first 10 laps were very consistent. By lap 11 my quads were shot and I had to slow down quite a bit on the last 2 laps, but I still managed to average a 9:30 pace over the entire race and finish with a total cumulative time of 4:55:18, good enough for 21st out of 69 total runners, and exactly middle of the pack for my age group (4 out of 7 for males between 35-39).

Considering that this was my first 50k attempt. I’m extremely pleased with those results. Even more importantly, I don’t think I hurt myself.  😅

While that is the total cumulative time on the race clock, I do not consider that to be my actual 50k time. That time is only meaningful within the context of this specific event. If I had tried to run 50k continuously there’s no way I would have been able to maintain that pace and finish under 5 hours. Realistically, had I run 12 laps continuously I’m not certain I would have finished in under 6 hours much less under 5 hours.

The total time that elapsed while I completed the race was 8:42:44. That’s my current 50K PR as far as I’m concerned. Nothing to write home about, but still, 50k ☑️.

My Garmin Says I Didn’t Quite Make it to 50k

I used my Garmin Forerunner 935 to track my laps. I paused it between each lap so it only counted the time I actually spent out on the course. If you look at the data from my Garmin, it shows I only completed 30.6 miles, which is about a half mile shy of 50k.

So you might be tempted to be pedatic and say “Aha! It doesn’t count as a 50k!”

Since this is the longest I’ve ever run, I learned a lot – or at least, realized I have a lot to learn.

I Need to Learn About Nutrition

I went into this event without any sort of plan for nutrition. I took a variety of salty and sweet foods: some light (chips), some heavier (chocolate and peanut granola bars). I also took a half dozen bananas, plenty of water, some black coffee, and three electrolyte drink packets to mix into my water.

I bonked pretty good during lap 7. Thankfully, I realized what was happening and between laps 7 and 8 I drank a lot of fluids, some with electrolytes mixed in, and ate a bunch of cheap calories (chips and cookies). Then my legs gave out entirely after lap 10. I have no idea if nutrition could have helped with that, but certainly knowing more about nutrition wouldn’t have hurt.

Having completed the event, I’m really not sure what I should have done differently, I just know that I had no idea what I was doing. I need to at least have some kind of strategy next time so that I have a basis of experience to iterate on. My non-plan during this event was so scattered that I can’t even draw any real observations from it other than: I was ok until I wasn’t, and then I was ok-ish again, until I wasn’t again.

I Need to Take It Easier on the Downhills

I over did it.

I Need to Get Some Squirrel’s

Squirrel’s Nut Butter is a popular anti-chaffing product for runners and other athletes. Without getting too graphic, I could have used some Squirrel’s in a variety of places on Saturday.

Racing in a Pandemic

Participating in this race was a risk. I recognize that. The organizers did take measures to try and run an event that was as safe as possible:

I think the organizers did as much as they could to minimize the risk of spreading coronavirus. The only realistic step that would have reduced the risk further would have been to just not hold the event. While I don’t think it’s likely I contracted coronavirus, I do plan to pay close attention to my body over the next few days just in case.

Hats-Off to the Organizers

I’ve run about a dozen races. This event was as well run as any other event I’ve participated in. The race was put on by Upstate Ultra and timed by Go-Green Events. Having run one event put on by these organizations, I’d happily recommend any other event they put on.