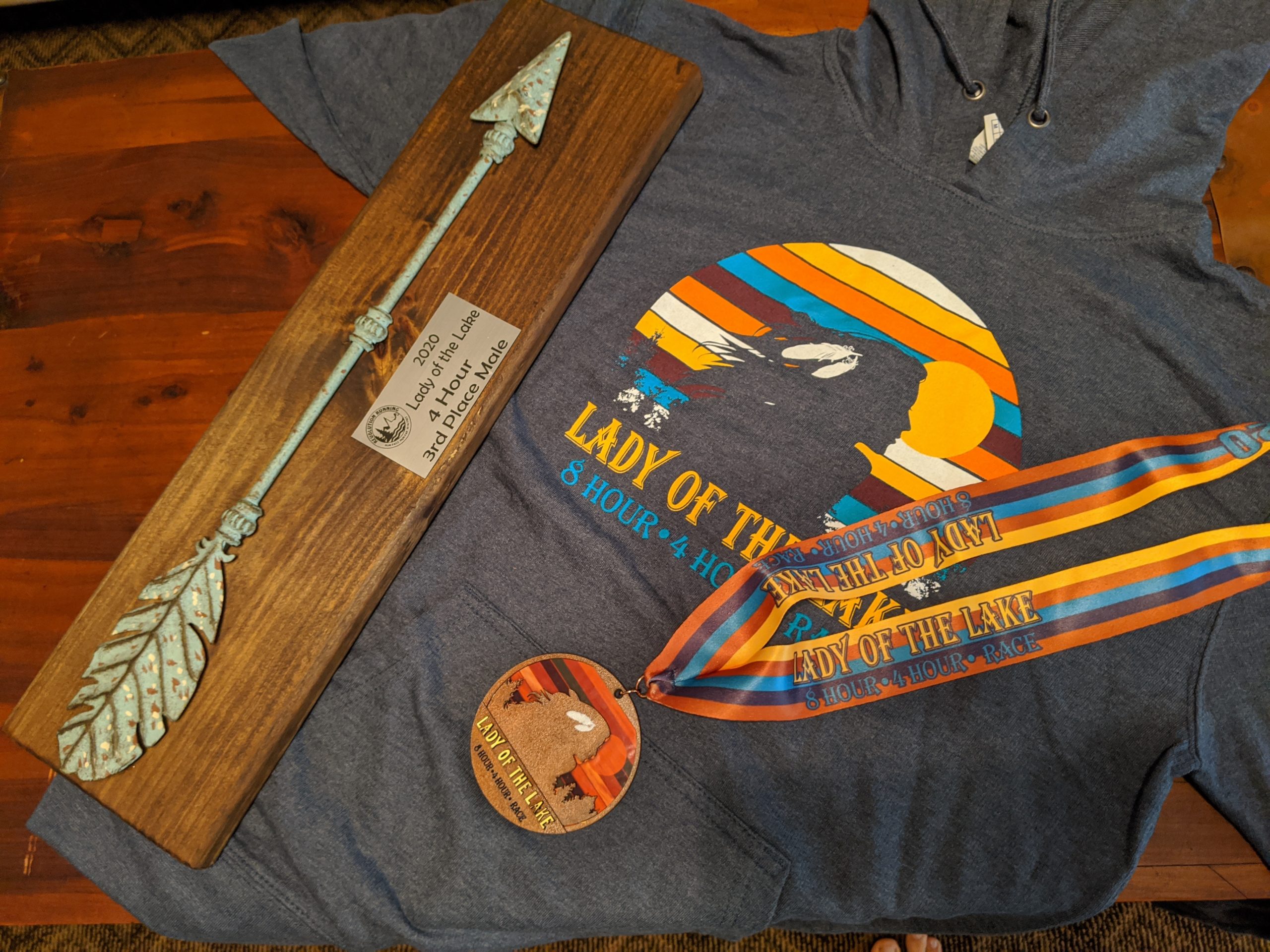 Yesterday I ran the Lady of the Lake four hour race. The concept of the race was simple: in four hours, complete as many loops as possible around Lake Trahlyta at Vogel State Park.

There was also an eight hour version of the same race run at the same time. However, I opted for the four hour option recognizing that my legs simply aren’t ready for an eight hour long event.

The course consisted of a one-mile loop around the lake and included a variety of surfaces including asphalt, brick pavers, dirt, grass, wood decking, and small gravel. About a quarter of the trail was modestly technical with winding turns and moderate elevation changes on a dirt single-track path broken up by plenty of roots and rocks.

There was quite a bit of elevation change. While there were no climbs of more than ~10-15 feet, about half of the trail follows the natural lay of the land. Considering that Vogel State Parts sits in small valley nestled tight against the encroaching mountains, that means that the natural lay-of-the-land is almost never flat. If I had to guess, I’d say that was a total of 50-100 feet of elevation gain during each mile-long loop.

Training for the Race

I registered for Lady of the Lake at the end of June. My long runs at the time were in the 5-7 mile range and I was only running one day per week. So I knew I had my work cut out for me.

Registering for Lady of the Lake coincided with a major ramping up in my workout routine. In early July, I adding five days of cardio to my pre-existing bodyweight exercise plan. Those five days consisted of some combination of spinning, running, and swimming, though I limited my running to two days per week in July and only bumped up to three days per week in the middle of August.

I think it’s important to point out that it’s not like I had been sedentary prior to registering for Lady of the Lake. I have been pretty consistent in sticking to a bodyweight exercise routine and gone running 2-4 times per month for the past 18 months. I did start training specifically for Lady of the Lake in July, but I was building on a pretty solid foundation.

In early September I went on two longer runs of about 10 miles to work on building up leg endurance. My legs held up just fine to those tests which left me feeling pretty good about my chances of making it through the four hour Lady of the Lake event.

I began to rest my legs in the week leading up the Lady of the Lake. I only ran once, a very leisurely 3.5 mile jog on Wednesday, and did 30 minutes of low-intensity spinning Monday, Tuesday, and Thurday. I then rested completely on Friday, even skipping my bodyweight workout for the first time in months.

I got up at 5:45 AM on Saturday, walked the dogs, loaded up on gear, bananas, and water, and was headed to Vogel State Park by 6:20 AM. It’s an hour drive from my house to Vogel and I was checked in by 7:30 AM. This left me plenty of time to set up a chair right next to the course so that I could grab anything I needed quickly and easily without leaving the course, and to warm up my legs with a quick walk.

My goal was to take it really easy for the first two hours and then assess my condition and decide how to proceed. My thinking was that I really had no idea how I’d feel after two hours. My longest runs coming into the event were only 10 miles, which I ran in about an hour and a half. That lead me to believe that I’d go downhill quickly beyond the two hour point, and that 20 miles was a reasonable target if I could keep from getting hurt.

With that all of that in mind, right out of the gate I settled into a “run forever” pace of about 10:30 per mile.

How Things Played Out

The race played out exactly as expected. I felt great for the first hour. I felt good for the second hour but began to feel myself tiring. At the two hour mark I had run 11 miles and I could tell my legs were really tiring. So I walked about half of the twelfth lap while I ate a banana (my second of the race) to try and give my legs a breather.

Once I passed the half marathon distance things really got tough. My hamstrings were really tired from the constant elevation changes and my feet where really starting to ache.

Laps 13-17 were really really challenging. While I didn’t have any joint pain, my legs were very tired and basically everything between my hip flexors and toes hurt.

As I started lap 18 I was still just as tired and things still hurt, but I realized that my goal of running 20 miles was within reach. It was also a bit of a mental relief to realize I only had three miles to go to hit my goal and that 21 laps wasn’t out of the question. With renewed energy I pushed on.

With 17 minutes to go, I finished my 20th lap and decided to settle in for one last cool down lap. I took the first half of the last lap very easy. However, about half way through that last lap I caught up to a runner who was also running the four hour event and realized we were likely very close to each other in the standings. I had a feeling that he was a lap or two ahead of me, but I couldn’t be sure. I thought it was possible that if he had taken a break during the race, I could have passed him without realizing it.

The two of us ended up racing each other during the last half of the final lap as neither of us was sure if we were on the same lap or not, and neither was willing to concede the race to the other. We ended up crossing the finish line one second apart. Once we crossed the line and looked at the leaderboard we realized he was actually two laps ahead of me. Nonetheless, it was fun to finish with a nice kick and a bit of head-to-head competition.

How Do I Feel Today

As I write this blog post, it’s been exactly 25 hours since I crossed the finish line. While my legs are tired and sore, I’m so very happy that I don’t have any injuries. I have some muscles that are letting me know that I pushed them harder than usual, but no joint pain, shin splints, or any other dreaded overuse injury.

I’m also absolutely thrilled with how the race went yesterday. I can’t overstate how personally rewarding it was to run 21 trail miles in four hours without injury.

After the race yesterday I explained why I was so happy with the results in a post I made in Slack:

Today I’m happy because my body is healthy and lets me do hard things.

Back in 2012 I tried to run a half marathon (13.1 miles). I hurt myself twice during training (IT band issues in both knees) and was never able to run further than 5 miles during the 6 months I tried to get ready for the race. I ran it anyway (well, “ran” is generous). I ran the first half, walked the second, and tore something in my calf that took a full 3 months to heal.

Then a few years later I tried to get into shape again and hurt my knee (partially detached patella tendon) playing basketball.

That was 2014 and I swore off running. Clearly it just wasn’t for me.

Then 2 years ago I decided to give it one last try. This time, rather than start with running, I started with bodyweight exercise and only ran a short run (1-2 miles) one day per week. I did that for over a year and then slowly, very very slowly, started ramping up my mileage.

Anyway, what makes me happiest is that I finished uninjured. Sure, I’m tired, and I’m sure I’ll walk funny for several days, but I’m 37, and at ~30 I thought my days of running were over. So while I’m happy that I was able to land in 3rd place, the truth is that I’m happiest and most thankful that body is just capable of doing what I I did today.

I love running. I’ve loved running for many years and I’m profoundly grateful that I’m able to run.

While I’m thrilled with how this event went, I fully realize that running 21 miles is not something I’m physically equipped to do on a regular basis. It’s a virtual certainty that I will injure myself if I pretend like my body is capable of maintaining that level of output repeatedly without first gradually building up to it.

Realistically, based on my running over the last few months, the 10k distance is the right distance for me today. So, my running goals for the next several months are as follows:

I’ve been injured enough in the past to know that none of this can be taken for granted. Injuries to runners are very common, especially for runners such as myself who are trying to increase the distances they cover.

I have already registered for a 10k road race in two weeks. Between now and then I plan to get plenty of rest, run only twice per week, and generally take it easy to make sure my legs can fully recover from the Lady of the Lake.

Lake of the Lake Pictures

I didn’t take any pictures myself, but the company that organized the event, Revolution Running, posted a couple hundred photos to Facebook. Here are a few shots of the course as well as a few where I was caught on camera.