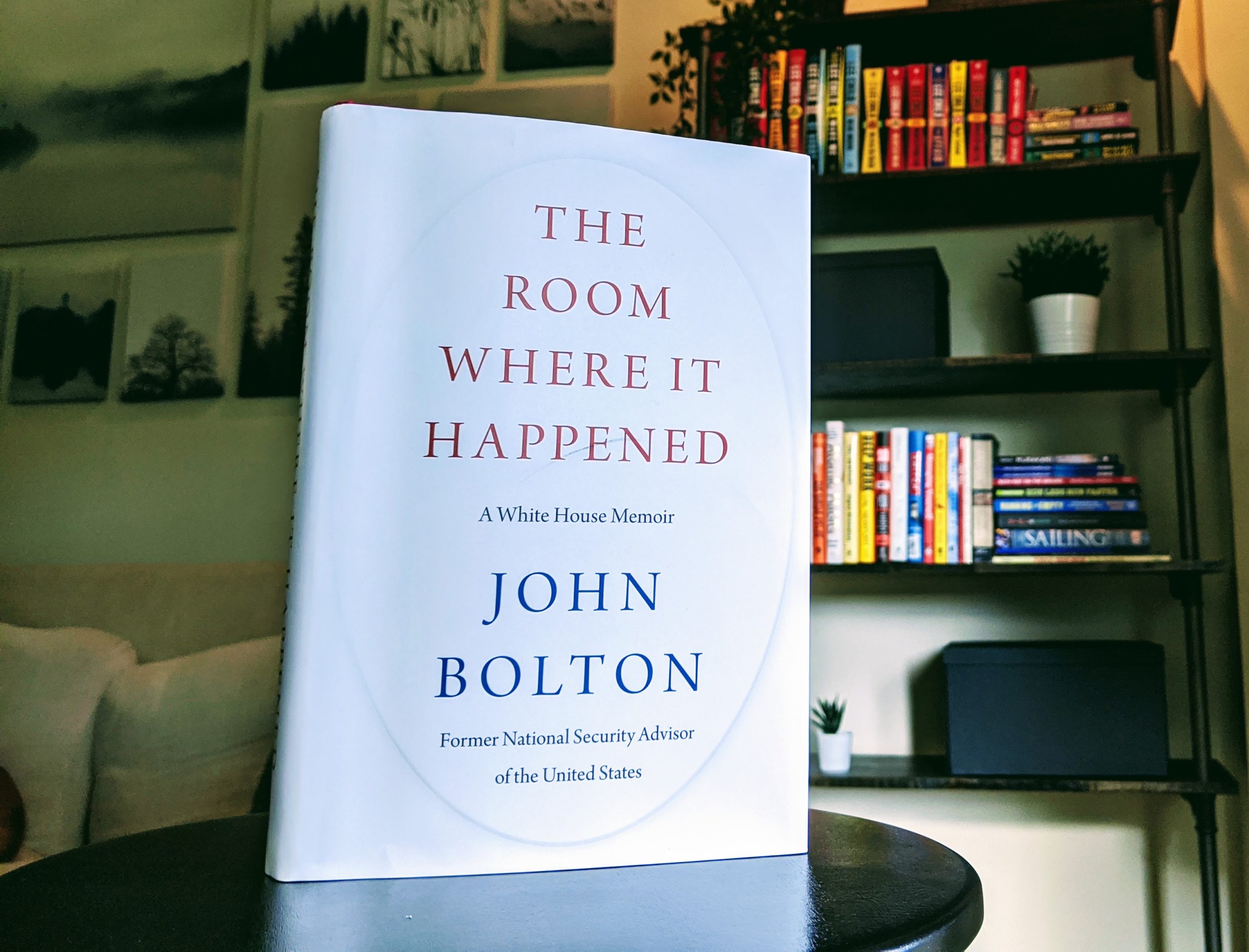 Before I get started a few disclaimers are in order.

First, I didn’t finish this book. For reasons I’ll get into, I opted to stop reading The Room Where It Happened about 350 pages in, which means I finished about 70% of this 494 page tome.

Second, I am not a fan of Donald Trump. My dislike of President Trump has nothing to do with Republican vs Democrat politics. I have a singular dislike for Trump. Back in 2016, I would have voted for literally any other presidential candidate, from either major party, over Donald Trump. You may want to bear that in mind as you read my review.

Third, I am not deeply informed in matters of international politics. I am generally informed. I read the news from a variety of sources and angles. I consider myself an intelligent person. However, I admit that I am far from an expert on the international political stage that serves as the backdrop for The Room Where It Happened.

With those disclaimers out of the way, let’s dive in.

John Bolton was President Trump’s National Security Advisor during parts of 2018-2019. The Room Where It Happened is a summary of the lead up to Bolton’s acceptance of the role and the work Bolton did as part of the Trump administration.

The book is generally organized into major topics. For example, chapter 9 is called “Venezuela Libre” and in that chapter Bolton focuses on the Trump administration’s efforts to back the opposition movement seeking the ouster of Venezuelan President Maduro. The content of that chapter spans several months and runs concurrently with topics covered in other chapters.

As a result of being organized in this fashion, the book is semi-sequential. Each chapter expands on a topic in sequential fashion, retelling events in order as they happened. However, due to the overlapping nature of the topics, the chapters themselves are not entirely sequential.

The result can be a little disorienting, but in general I think it was probably the best way to organize the content. Bolton really gets into the details. He clearly kept meticulous notes on a day-to-day basis, and the issues he dealt with as National Security Advisor were quite complex. A purely sequential retelling of events would be nearly impossible to follow.

Some of the topics covered in Bolton’s books deal with specific matters of international import, such as the chapter on Venezuela mentioned above. Others instead focus on an idea, such as Chapter 8: “Chaos as a Way of Life”, which attempts to capture the general chaos which consumed the Trump administration (as an aside, I found Chapter 8 to be the most interesting in the entire book).

The defining characteristic of the book is that it deals with each topic using a moment-by-moment “as it happened” approach, as opposed to providing a high-level overview. To illustrate my point, I’ll open the book at random and type of a sentence that illustrates what I’m getting at:

…Laughing, Kim distinguished Trump from this three predecessors, saying they would not have shown the leadership to hold the summit. Trump preened, saying that Obama had been ready to make significant mistakes on North Korea, without even talking first, alluding to their initial meeting (presumably during the transition)…

Ignore the content for a moment. The thing to notice here is the “play-by-play” nature of Bolton’s narrative. Bolton literally walks you through countless meetings, phone calls, and other conversations in this style. The entire book is written in this approach and it’s incredibly difficult to follow for an extended period.

It seems clear that Bolton despises Trump, and seems to have despised him pretty early on in his role (though he never says this in the portions of the book that I read). Bolton’s opinion is veiled in sideswiped comments, such as early on when he notes that this administration was not nearly as organized as the prior Bush administration he had served in.

Bolton’s portrayal of the Trump administration is scathing. He portrays an administration in complete chaos, where colleagues were constantly engaged in posturing and infighting.

Bolton portrays Trump individually even more negatively than the administration as a whole. Trump comes across as ignorant, shallow, and solely-focused on his approval rating. In addition, you get the impression that Trump is a lot more interested in schmoozing and befriending violent dictators (Kim Jong-Un) and strong men (Vladimir Putin) than in building strong relationships with the allies of the United States, who he routinely chastises and belittles.

I think it’s important to take Bolton’s criticisms with a grain of salt. Bolton is no friend of the administration, he’s also not an impartial outside observer. When you read Bolton’s take on Trump and his administration, you’re reading the opinion and observations of someone who seems to despise the President.

Having said that, nothing I read surprised me. As I mentioned early on, I’m no fan of the President, and Bolton’s description was exactly what I expected.

Why I Didn’t Finish the Book

I didn’t end up finishing The Room Where It Happened for a few different reasons.

First, I was not enjoying the book. My experience has been that when I force myself to read something I’m not enjoying for too long I end up burning myself out.

Second, this book is just a very tough read. If you’re interested in reading an hour-by-hour narration of Bolton’s interaction with various issues as part of the Trump campaign, you’ll really enjoy this book. On the other hand, if you were hoping for something a bit more narrative with more commentary, you’ll be frustrated. I’m sure the hour-by-hour approach will be really interesting to folks who are deeply engaged with the actual minutia of government, but for the rest of us who want the eagle-eye view presented with helpful commentary, this approach isn’t what we’re looking for.

Third, I wasn’t reading anything earth-shaking. I expected this book to be a slog. However, the reason I bought the book anyway was that I expected it to contain new information. I didn’t feel the book delivered on that promise. It simply confirmed what I already assumed.

Should You Read the Book?

1 thought on “Short Book Review: The Room Where It Happened by John Bolton”