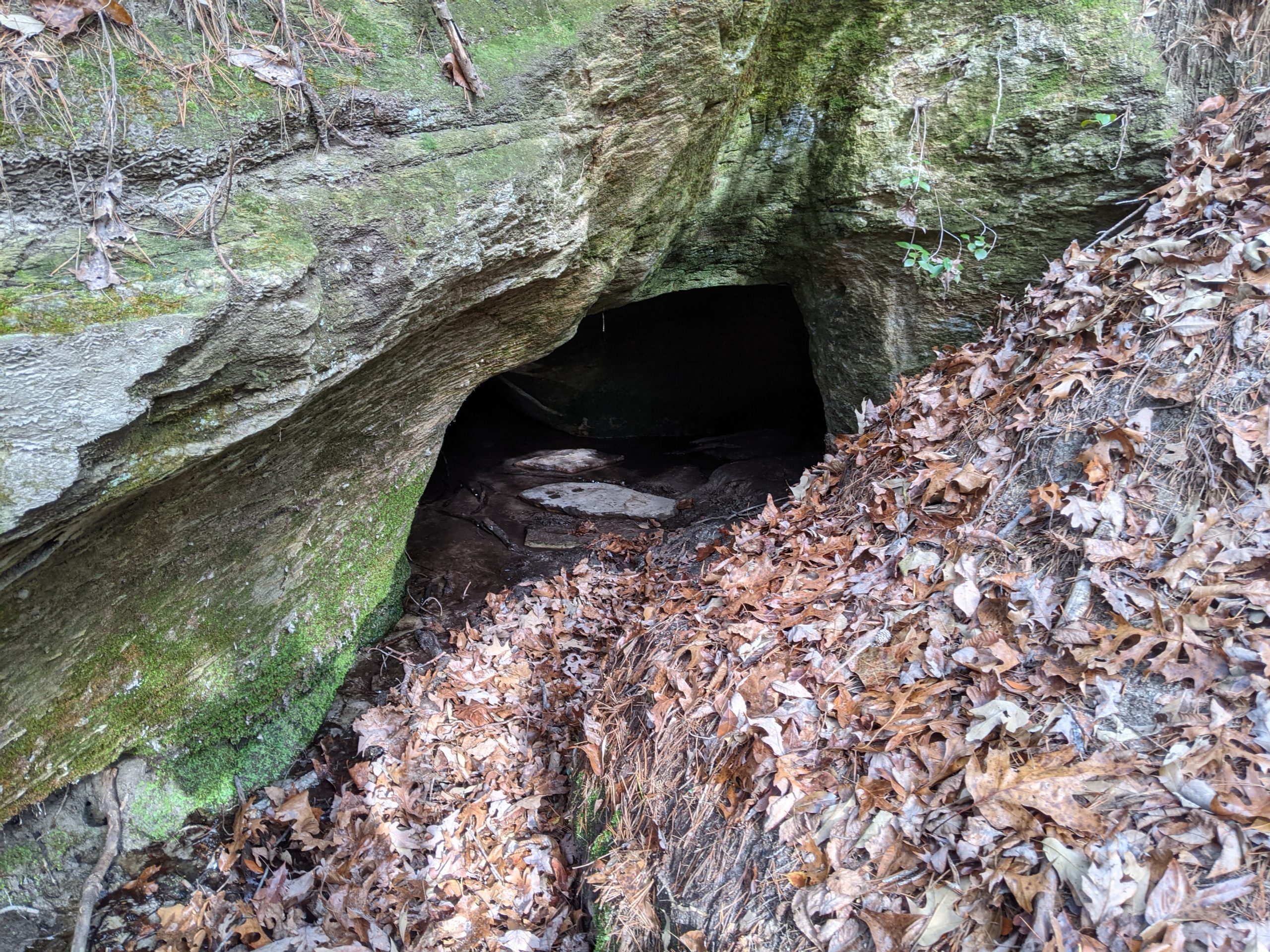 A few months back, while poking around on Google Maps, I stumbled on a landmark in the Lake Russell WMA called “Roman’s Den.” I was intrigued.

The reviews and photos told the tale of a small cave which served as a hideout for two men during the Civil War. According to the story, the men were effectively conscientious objectors. Native American, the men were unable to vote and didn’t feel they should be forced to fight for a state or a nation that didn’t treat them with the full rights of citizenship (a reasonable position, if you ask me).

Caves are few and far between in northeast Georgia, and I’ve been all over the WMA and never seen Roman’s Den, so I wanted to find it.

I went on a long run yesterday, and the dogs needed to get some exercise. So today was the perfect day to stretch the legs in the WMA with a relaxed hike while trying to find Roman’s Den.

I knew that Roman’s Den was near the convergence of Leatherwood Creek Trail and Pear Orchard Loop. It’s an area I’ve been to quite a few times. So I loaded up the pups, got as close as I could with the secondary forest service roads closed this weekend, and we hiked into the area.

As the GPS data will attest, it took us a few minutes to find Roman’s Den.

In the end, we did find the cave. Maybe I can save you 15 minutes with a little more information about where exactly to look. As you can see in the map above, Leatherwood Creek basically runs north to south in this particular stretch. There are two relatively easy ways to get to Roman’s Den.

Option 1: Take the unmarked path that runs down the hill when coming down Pear Orchard Loop.

As you come down Pear Orchard Loop keep your eyes peeled for a small unmarked trail that heads down the hill towards the creek. As you come down this trail it will head down a very steep bank, at the bottom of this bank you’ll find Roman’s Den.

Option 2: Hike along Leatherwood Creek and cross when the seldom-used trail comes to a well-used crossing point.

If you look closely, just as you head down Leatherwood Creek trail you’ll see a seldom-used trail that runs down the bank of Leatherwood Creek. Follow that trail. After maybe 30-50 yards, the trail will head down to the creek. Head across the creek and into the woods straight ahead of you. Within about 20 yards you’ll reach a steep bank. Roman’s Den is at the base of this steep bank.

There’s a marker at the entrance to Roman’s Den. Open it up and you can read about the history of Roman’s Den. Apparently, at one point the cave consisted of multiple rooms. Many years ago, all but the entrance filled with dirt during heavy rains. Still, it’s an interesting bit of history and worth checking out if you find yourself wanting to spend a couple of hours in the woods.