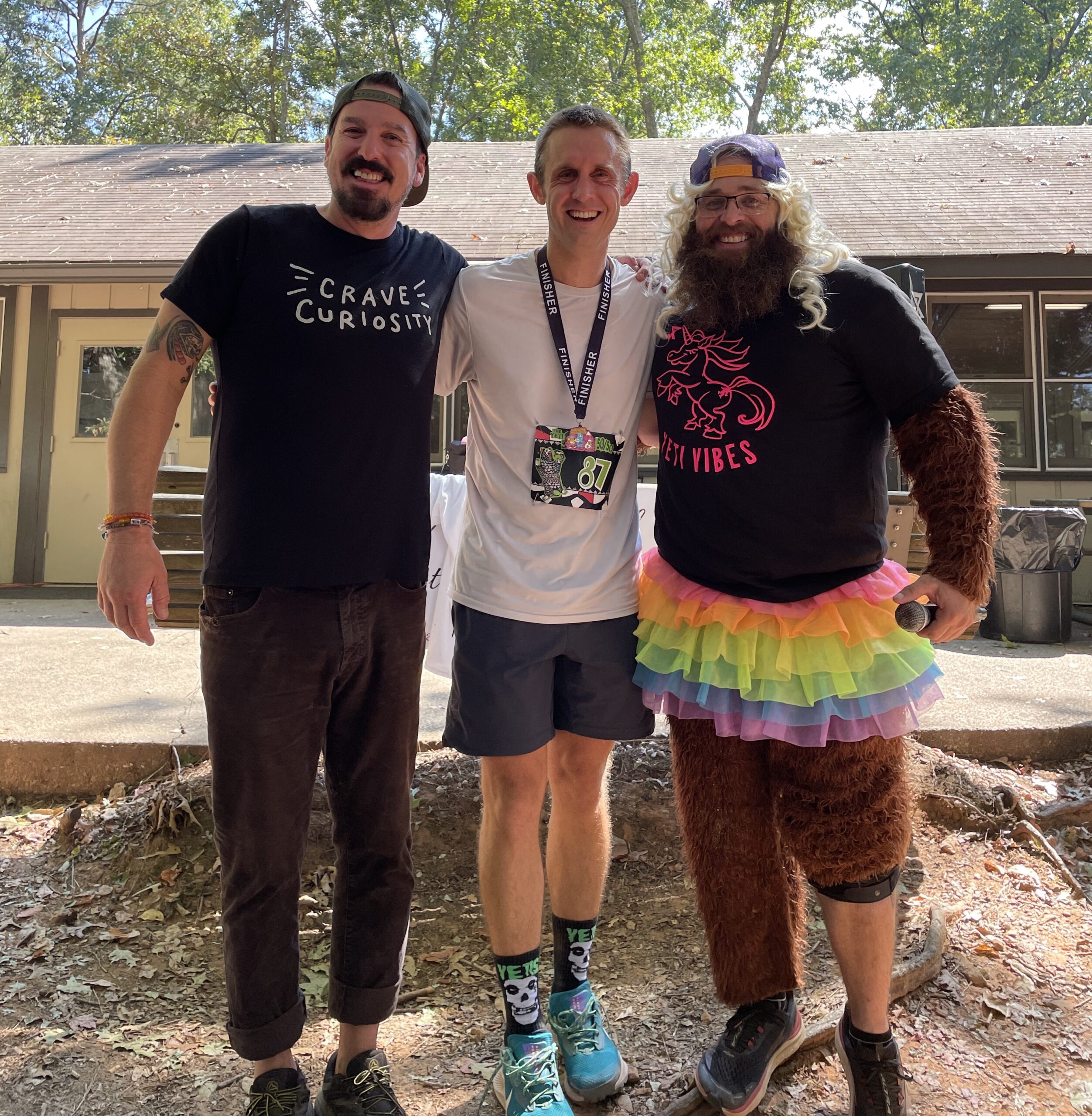 The Yeti Snakebite 50k (“Snakebite”) is a trail race put on by the Yeti Trail Runners at Sweetwater Creek State Park in Lithia Springs, GA just west of Atlanta. Snakebite has been on my race wishlist for the last year or two as a recommendation passed along by my running buddy Alex who has run the race twice. When race registration opened at the start of this year, I was ready and registered the very same day.

Preparing for the Race

I wasn’t very confident leading up to the race. After a round of stellar training back over the winter leading up to Conquer the Rock in April, I suffered a series of setbacks:

As a result of this series of setbacks, by late July my left knee patellar tendon was pretty unhappy as was my right achilles. I trimmed my running volume way back in the second half of July and well into August, running more than 10 miles just three times between July 9 and race day three months later. Despite this reduction in volume, my plantar fasciitis (self-diagnosed) worsened considerably in both feet as the summer wound down to a close.

While I had concerns going into Snakebite, there was also reason for hope. I hadn’t run many really long runs (only three 11 miles or longer in the three months leading up to the race), but I did log 15 runs between 8 and 15 miles between August 15-Oct 3. So very few monster runs, but quite a few middle-distance efforts.

Of those middle-distance efforts, quite a few included a speedwork element where I pushed into tempo or threshold pace for some portion of the run. These runs made me feel as though I could maintain pace through the first 20 miles, but I wasn’t sure about the last 10.

Finally, my efforts addressing my various ailments seemed to show noteworthy results heading into October. My achilles are generally happy as is my patellar tendon and a switch away from zero-drop shoes to more supportive shoes with a traditional heel-to-toe drop is helping my plantar fasciitis.

My training culminated in my longest run since July just a week before Snakebite: a 15 mile trail run with solid vert completed in under 3 hours. With that final brick in place, I felt like a sub-6 effort at Snakebite was possible if I could fit the pieces together.

On race day I got up at 5:10 AM, brewed a cup of coffee, and settled in for the drive down to Lithia Springs. I arrived and found a parking spot just after 7 AM: perfect timing to get checked in and ready for the 8 AM send off.

It was a beautiful day. At 8 AM it was in the mid-40’s, just warm enough to shed the extra layer and run in just a t-shirt and shorts, and warmed up to the low 70’s as the day wore on.

At 8 AM we were off. Unfortunately, about half the field didn’t show up to start the race. On the plus side, that meant a lot less traffic out on the trails for those of us who did show up.

This version of the course consists of a 10 mile loop that you complete three times for a total of about 30 miles. Most of the loop is made up of trails, though there is a bit of gravel and asphalt mixed in as well.

The first half and second half of the loop combine in a sort of figure-8 pattern. A single aid station is set up at the intersection point. The aid station was well-stocked with all the usual stuff: energy gels, gatorade, water, sodas, watermelon, pb&j wraps, and a lot more.

Each lap of the course also brings you by the parking area where all runners have their vehicles parked. This allows runners to also use their vehicle as an aid station if they wish to do so.

The second half of the loop is a little more challenging. The climbs are steeper and the trails are more technical. A lot of the second half is still very runnable, but there’s more uphill hiking and the downhills aren’t quite as fast due to the rocky, rooty surfaces and steeper grade.

Total vert per loop is about 1200-1300 feet, so over the course of the entire race you climb about 3600-4000 feet, and descend the same amount. While certainly not flat, Snakebite is one of the more runnable 50k’s in the northern half of Georgia.

Going into the race I really wanted to finish in under 6 hours. I felt as though I should be able to do that as long as I managed my effort level reasonably well and kept myself hydrated and fueled. On my local trails, I can do 10 miles on rolling trails in nice weather in 2 hours very comfortably, and more like 1:40 if I push, so stringing together three 2-hour easy-pace 10-mile loops felt doable, though not guaranteed.

I also just wanted to feel relaxed and light-footed while I ran so I focused on keeping my shoulders relaxed and taking quick short steps, especially on the downhills.

In terms of fuel and hydration, I carried my Nathan handheld bottle and stashed two gels in the accompanying pouch. The course was nicely broken into two sections by a single aid station which was encountered twice: at the 4.5 mile point and again at the 9 mile point. My plan was to try and mostly drain the bottle and consume a gel about 2 miles out from the aid station and then refill my bottle and grab something small that looked tasty at the aid station each time.

In addition, the course looped back through the parking lot where my car was parked, and each time I passed by my car I stopped to grab two new gels. I also added a Liquid IV electrolyte mix to my bottle between the first and second laps.

How Did it Go

My race strategy played out beautifully. I finished the first loop feeling fresh, energized, and strong. I finished the second still feeling good, but certainly less fresh than after the first loop. During the third loop I pushed harder than the prior two loops and let my heart rate push well into the threshold range on the flats and while running up gentle inclines – by that point, I was walking any steep climbs.

I managed my effort, fuel, and hydration about as well as I could have. If you back out the time spent at my car replenishing gels and liquids, my splits for the three loops were:

Given the temperature difference between the first loop (40’s-50’s) and last loop (60’s-70’s), that’s about as close to even splits as I am likely to every accomplish.

In the end, my official time on the clock was 5:25.41, good enough for fourth overall, and more than 30 minutes faster than my goal time of sub-6 hours.