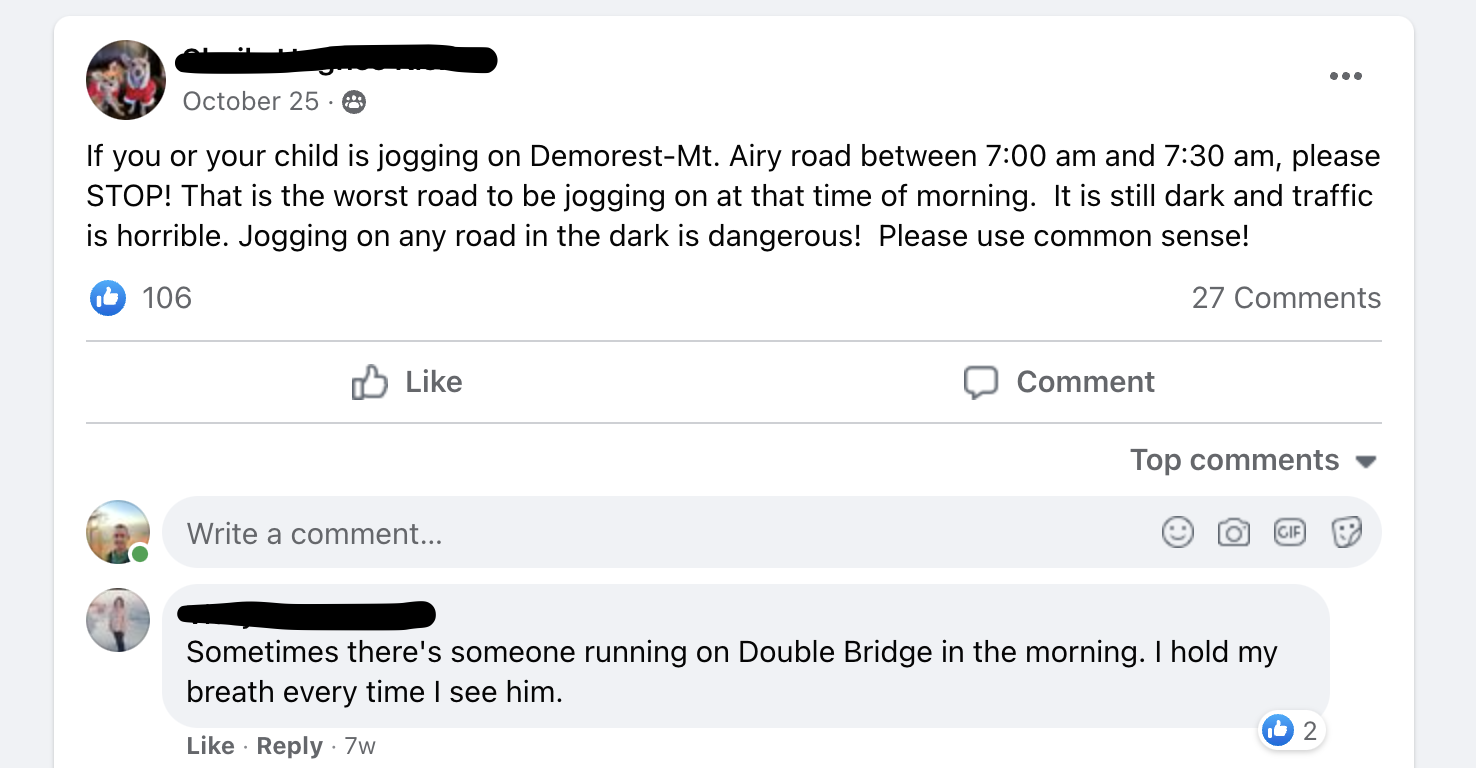 Roads can be dangerous places, particularly for pedestrians and animals who don’t have the protection of a vehicle and seat belt. As a runner who often runs on roads, and who has a rather overactive imagination when it comes to thinking of all the things that could go wrong, I have thought quite a bit about the dangers of running on the road.

While I don’t prefer to run on the road, I do run on the road sometimes because it’s the most convenient option available to me. When I’m pressed for time, I can get the most benefit out of limited time by running on roads.

The road I live on is only about a third of a mile long (about half of a kilometer) and there are only 8 houses on the road. So it’s quite safe to run on. There’s an uncrowded subdivision about a half mile (about .8 kilometers) away that is perfect for running as well: it has about 4 miles (about 6 kilometers) of wide roads with little traffic and many quiet cul-de-sacs. So when I do run on roads I usually start on my road and then head over to this quiet subdivision. The only trouble is that the half mile between my road and that subdivision is a narrow and windy stretch of road with a 50 mile-per-hour speed limit and regular (though not heavy) traffic. The only way to get from my quiet road to the nearby quiet subdivision is to run a half mile down a fairly dangerous stretch of the road, first going towards the nearby subdivision and then second while coming home.

Fear of the danger of running on that road stopped me from making the trip for nearly a year after we moved to our current house. However, about this time last year I made the run for the first time, and by following four rules I’ve been able to run that stretch of road nearly 200 times in the past year without incident. Here are my rules for safely running on this sketchy stretch of road.

When I run on a busy road, I always run on the very edge of the left lane. This means that when a car approaches me in the same lane, I can see it coming and react accordingly. If I were to run on the edge of the right lane I wouldn’t have the same visibility and wouldn’t be able to react to the actions taken by the driver of any oncoming traffic.

I’m not someone who prefers to listen to music while running, but even if I did I would never put in headphones while running on a stretch of dangerous roadway. Road noise the first sign you receive that a car is headed your way and wearing headphones mean you lose this signal. Not worth it.

I Get Off the Road Every Time a Car Goes By

Some drivers get over to give me plenty of space when they pass by. Others don’t. Since I can’t predict which drivers may get over and which drivers may not, I always assume a driver is not going to give me any space – actually, I take things a step further and assume that there will be cars going both in both directions at the same time or that the driver of the oncoming car will be looking at their phone and not give me an inch of space.

Based on the assumption that every oncoming car might hit me, I get off the road every single time a car goes be. If there’s enough space, I keep running in the grass down the side of the road. However, if the shoulder is too narrow of the grass is too tall I just stop and get as far off the road as I can, which often means standing in a ditch. Better to add 15 seconds to my run time standing in a ditch by the side of the road than to get hit by a car.

If It’s Dark, I Wear a Light

I don’t prefer to run in the dark, but at certain times of the year it can’t be helped. If it’s dark, I wear a headlamp or a chest-mounted light and keep it pointed towards oncoming traffic. I do this even if it’s not dark enough that I need the light. When running on a road, the light isn’t for me. It’s for oncoming traffic. This helps ensure that traffic headed my way can see me, even if it’s dark and even if the driver isn’t paying as much attention as the should be.

The featured image from this post is a screenshot from a local Facebook group I’m in. It caught my eye because the first comment is about someone running on the very road I’ve been talking about in this post. I don’t think I’m the runner referenced in that comment – I have a neighbor who runs on the same road and who doesn’t follow all the rules I do, and I’m pretty sure the commenter is thinking of them. However, this post is what made me think about these rules and reminded me that these rules are important and keep me safe.