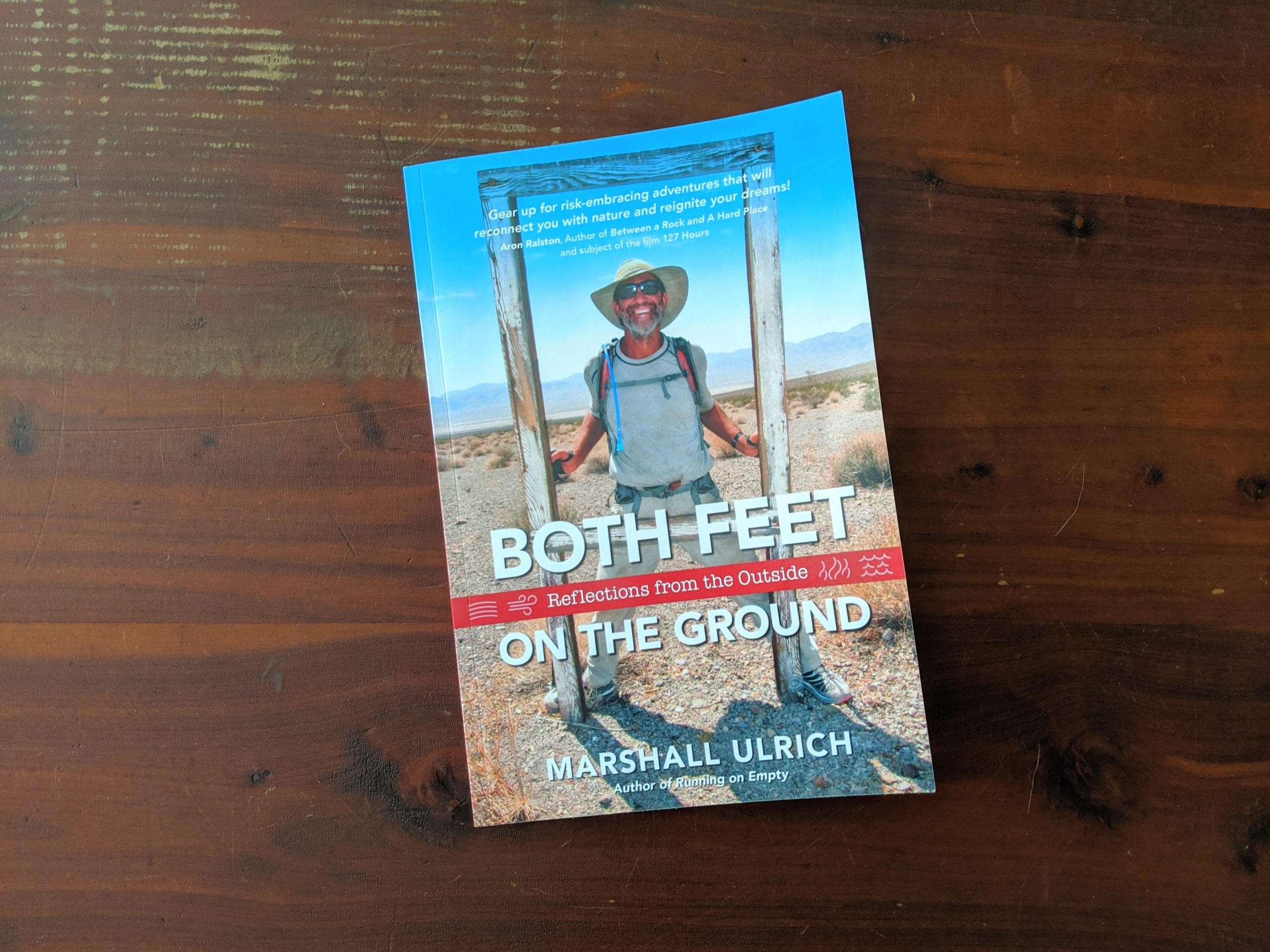 A couple of weeks ago, I read Running on Empty by Marshall Ulrich. When I finished, I wasn’t ready to be done hearing from Ulrich, so I looked up his other work and found a second book: Both Feet on the Ground.

I picked up Both Feet on the Ground without really knowing anything about it. It seems to be a less-ambitious project than Running on Empty. It’s considerably shorter than his prior book and seems to have followed a sort of hybrid indie/self-published model. (Note: Just so we’re clear, this is pure speculation on my part; I know very little about the book publishing industry.) The point is, where Running on Empty was put out by a major publisher on the heels of a record-setting athletic endeavor and thus feels like it has it’s sights set pretty high in terms of reach and commercial impact, I get the sense that Ulrich’s goals with Both Feet on the Ground were less commercial and more personal.

In short, the book feels to me like it marks a turning point in Ulrich’s life, and the book consists of a collection of the stories and ideas Ulrich wants to use to define the next phase of his life, one that’s less defined by athletic achievement and more focused on personal wholeness and healthy relationships.

Brief Synopsis of the Book

Where Running on Empty tells the story of Marshall’s life, couched within the context of a specific event, namely his attempt to run across the United States, in Both Feet on the Ground, Ulrich aims to deliver a sort of overview of how he sees the world, told through the context of his life as an endurance athlete.

The books works its way through several concepts–daring, perseverance, retreat, etc. At each stop, Ulrich brings in stories of his past adventures: climbing Mount Everest, completing the Badwater Quad, circumnavigating Death Valley on foot, competing in adventure races, and so forth. The stories complement and illustrate the concept, and in each case Ulrich is driving home the point that there are tangible benefits to getting outside and pushing your personal limits.

Readers of Running on Empty will find a lot of crossover between the books. Ulrich touches on the challenges of his younger years, divorce and poor family relationships, and some stories are repeated in both books, although generally with a lot more detail in Both Feet on the Ground, while they may have just been mentioned in passing in Running on Empty. Don’t get the wrong impression though; there’s also plenty here that’s new and lots of stories that went untold in Ulrich’s earlier book.

Ulrich is an amazing guy. He’s accomplished some truly unbelievable feats. He’s run across the United States. He’s summited the seven highest peaks in the world (and many more to boot). Along with Dave Heckman, he circumnavigated Death Valley on foot. All of this makes for fascinating reading. A retelling of Ulrich’s various exploits is worth reading even if that’s the entirety of the contents of the work. In this case, that’s not the entirety, but if it were, that would be enough.

Ulrich makes a point of being honest yet fair throughout his stories. Ulrich doesn’t come across as the hero of the book, rather just the primary protagonist. He often paints others as the heros: Heckman as the one who saved Ulrich’s life in Death Valley; the Sherpa, Pemba, and his counterparts, as the true mountaineers when summiting Everest; and his wife Heather as the hero who helped Ulrich come to terms with his relationally-destructive tendencies and turn things around.

Ulrich is also clear-eyed about the risks of the various adventures he’s been on. He talks about friends who have died during extreme running events, he talks about the dead on Everest who cannot be recovered and buried, he talks about the intrinsic selfishness of engaging in a completely optional activity that might kill you.

I appreciate Ulrich’s open-eyed honesty throughout. He isn’t unrealistic about what he’s accomplished. He isn’t puffed up. He doesn’t minimize the risks or possible negative interpretations. He’s accomplished a lot in his life, yet he remains firmly rooted with both feet on the ground.

I’m not sure there’s anything I truly disliked. If I were going to be really picky I’d say that Ulrich’s writing style isn’t my favorite. My favorite writers are conversational. When you read their books you feel like they’re talking to you. I don’t get that with Ulrich’s writing. Don’t get me wrong. The grammar is fine, the words well-chosen, the end-product polished and professional. It’s just that as I read the book I just feel more like Ulrich is giving a talk rather than sharing a story one-on-one.

This is truly a trivial complaint. The book reads a bit like a TED talk, and that’s not a bad thing necessarily, it’s just not my thing.

I’d have a hard time coming up with anything else to point out as something I disliked. It’s an interesting read, never dull. If anything, at 160 pages long, I disliked that it ended so soon.

Much like Ulrich’s earlier book, I’d recommend the book to folks who are into pushing themselves in some fashion: physically, intellectually, professionally. If you aren’t into pushing yourself, I think you’d spend the entire book frustrated by Ulrich’s choices and yelling “Why the hell would you want to do that?” On the other hand, if the thought of circumnavigating Death Valley on foot raises a tinge of excitement in you, then yes, you should definitely give Both Feet on the Ground a read.