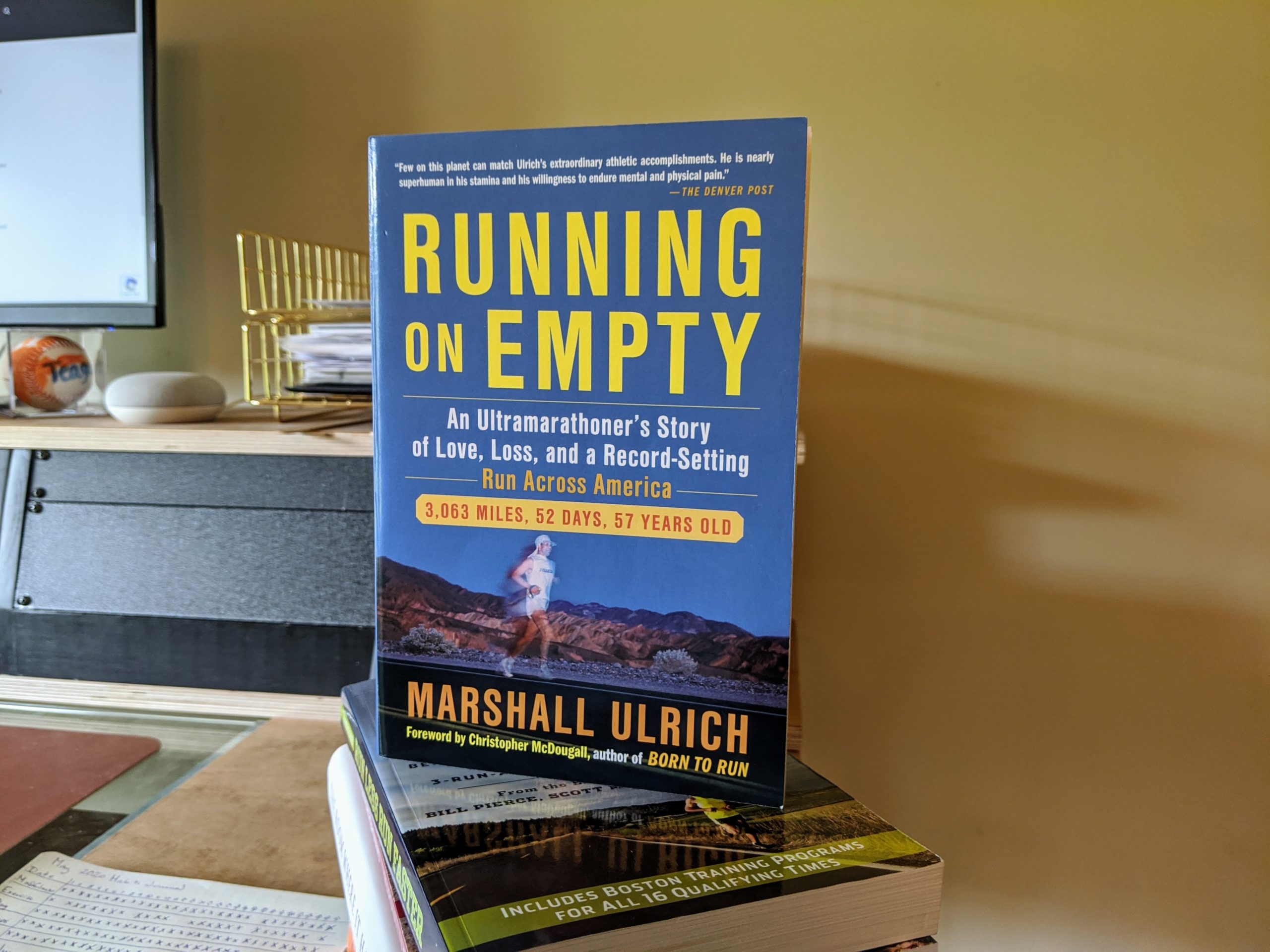 Running on Empty tells the tale of Marshall Ulrich’s run across America. Yes, you read that right. He literally ran across the country, from California to New York.

Back in 2008, Marshall Ulrich departed from San Francisco on September 13, 2008 and arrived in New York City on November 4, 2008. He ran the entire distance–a total of 3,063.2 miles over the course of 53 days for an average of nearly 58 miles per day. In doing this, Marshall set the Master’s and Grand Master’s world records for the fastest crossings of the United States on foot, and was the third fastest overall. He did all of this at the age of 57.

Running on Empty serves as both a retelling of the story of Marshall’s run across America as well as personal memoire that follows Marshall from his childhood on a farm in rural Colorado up to the current time. In the process, the book demonstrates the linkages between Marshall’s personal life, business endeavors, and his efforts as an endurance athlete.

Marshall is an endurance athlete. While this book focuses in on his exploits as an ultrarunner, he is also an accomplished mountaineer who has climbed the seven summits, and he has participated in adventure races of all types as part of the Stray Dogs adventure racing team.

Marshall’s run across the country was tremendously challenging in many different ways. The most obvious challenge is that the human body simply isn’t well-suited to running 50+ miles every day for months on end. During the course of the run Marshall endures many injuries that would have put most runners on the sideline for weeks or months. Rather than stop, he just kept right on going.

In addition, the book gives a clear description of the logistical headache this project entailed as well as the incredible commitment required by both Marshall and those helping him. In a typical day, Marshall would start at 8 AM and finish at 1 or 2 AM in the morning, having only stopped for an hour in total throughout the day. Every mile along the road, a van would stop and get him whatever he needed: liquids, food, fresh clothes, medical attention. Once Marshall has passed the van they’d pull ahead another mile and do it all over again.

This wasn’t a one-man project. Marshall was assisted by a fulltime support team consisting of two vehicles (a van and an RV) and a handful of individuals tending to his needs.

Another point the book spends a little time on is that Marshall’s run was supposed to coincide with that of another endurance athlete, Charlie Engle. Charlie and Marshall set out together from San Francisco city hall and ran together for most of the first day. However, Charlie was injured within the first couple of weeks and was unable to continue, though he did ride most of the rest of the way on a bike. However, for reasons that aren’t totally clear in the book, Marshall and Charlie butted heads repeatedly as the run wound down to its conclusion and it seems that by the end of the project the two weren’t on speaking terms.

In the end, Marshall does make it. He doesn’t quite set the all-time record, but he does set the Master’s and Grand Master’s records. He runs across the entire country–the third fastest crossing of the United States on foot, as of the time he finished.

The book is about Marshall’s run across the country, but it also highlights a lot of challenges that Marshall faced growing up and throughout his life. Without getting too lost in the details I’m sure to get wrong, let’s just say that Marshall has faced the death of a spouse, multiple divorces, and several badly fractured family relationships. Running was the drug he turned to during hard times in his life, and it served in both a positive therapeutic sense as well as in a negative escapist sense. Running helped him deal with hard times, but also enabled him to run away from engaging in the most difficult situations he faced.

Ultimately, this story is about Marshall coming to terms with his shortcomings, intentionally seeking a supportive relationship with his current wife, and working to rebuild fractured family relationships. It’s a story of perseverance and hope.

I also appreciated the honest and clear-headed perspective on ultrarunning. In the past, I’ve been bewildered by the ability of these folks to run hundreds of miles and wondered how they did so without injury. What the book made clear is that Marshall routinely suffers overuse injuries while competing. He probably avoids them while training, for the most part, but while in competition he simply pushes through what he refers to as “soft tissue” injuries. In other words, if the damage isn’t going to be permanent, if he’ll be able to recover from an injury eventually, then while he’s in competition mode, he just keeps going.

I’m not sure there’s anything I disliked about this book. It’s a great read. Marshall seems to be really honest about who he is, his own shortcomings, and his successes. He balances his exploits as an endurance athlete against his sense that he hasn’t been the father and husband he should have been (that last bit being something that’s all too relatable). There’s some conflict in the book, but I felt as though Marshall did his best to be fair to those who were on the other side of those disagreements, even while making it clear that he felt that he and his wife were treated poorly and unfairly at various points.

In other words, the book is fun to read and I never felt like he was boasting without cause. Marshall seems like an amazing endurance athlete and all-around great person.

Who Else Should Read It

I’d recommend this book to anyone who’s into pushing themselves mentally or physically, ultrarunning, adventure sports, or interested in reading a great story about someone who did something exceptionally difficult. On the other hand, if you can’t understand why anyone would do anything that would make them sweaty or force them to shit in a cornfield, this is probably not a book you’ll enjoy.