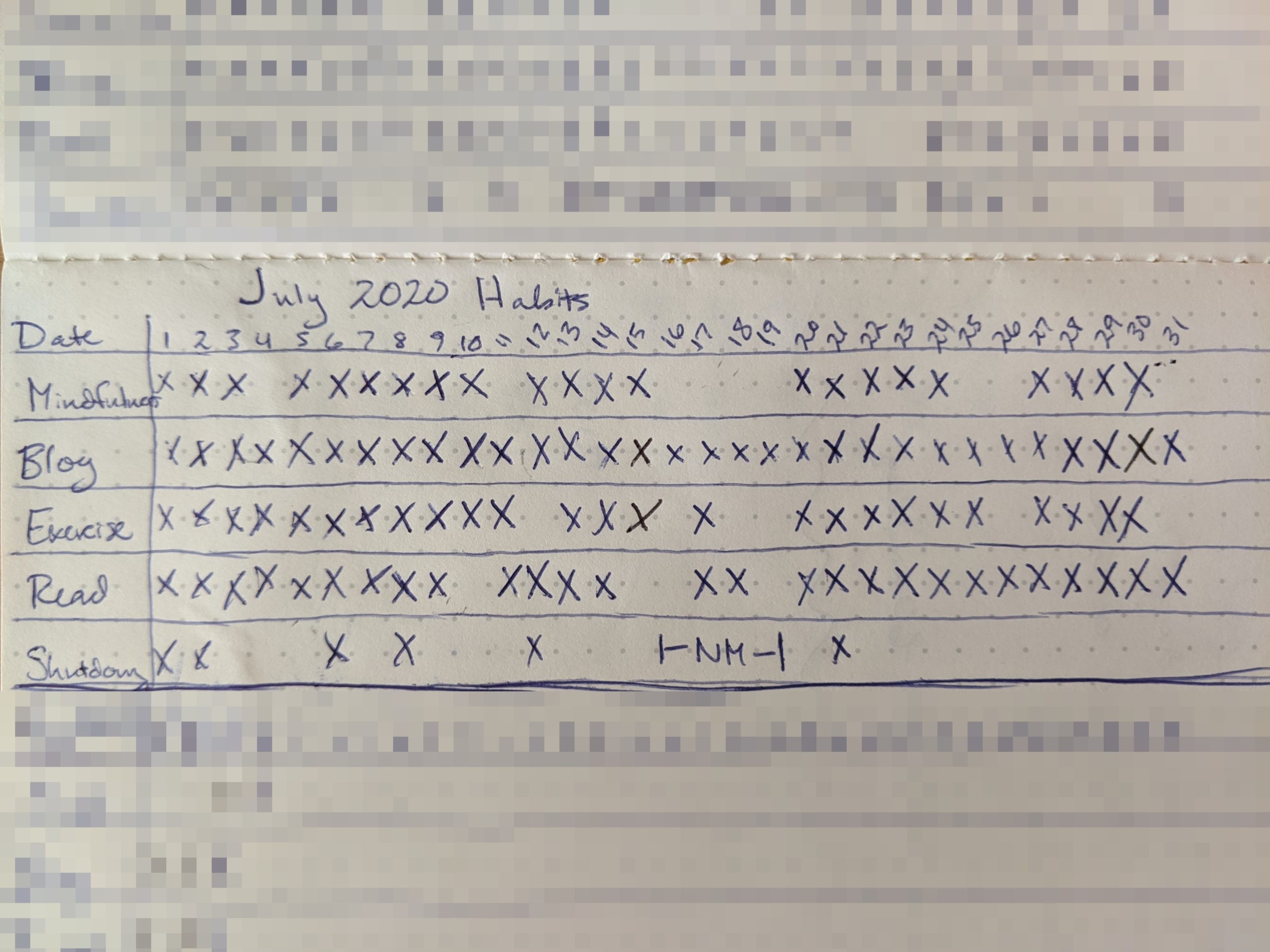 While I’ve written about my habit plans for August, I haven’t yet recapped how things went in July. So today I’m going to do that.

In July, I had five habits I wanted to focus on:

Here’s how I did on each habit.

Practiced 22 out of 31 days, 71%. That’s a passing grade, but just barely. I’ve always struggled to practice consistently on the weekends and this past month proved to be a continuation of that same pattern. I also missed a few days in the middle of the month when I was away from work for 2 days on a trip.

I’m not thrilled with how things went in July and August isn’t off to a great start. Mindfulness feels like one of those things that might slip away in the coming weeks. We’ll see.

31 for 31! I managed to keep the streak alive and published to this blog every single day in July.

As I look back over what I published in July, I’m actually really happy with the quality. While there were a few “check the box” type of posts, I also published several posts that were meaningful to me and represent a lot more than a bare minimum effort.

My goal has been to exercise at least 5 times a week for a total of at least 20 times in the month. I easily surpassed that target and exercised 25 days in July.

I didn’t actually finish many books in July compared to June. In July I only finished two books: Why Buddhism is True and Both Feet on the Ground. That’s compared to five books I finished in June. I finished fewer books for two reasons. First, there were a few books I started in May and finished in June. In effect, giving me a head-start on the month. Second, I’m slogging my way through The Room Where it Happened right now–a 494 page political soap opera I probably should never have started–and I’m moving slowly on that book because nearly every page is a chore and I can’t seem to stay awake for more than 10 minutes at a time when reading at night after the kids are in bed. Right now I’d say there’s only about a 30% chance I finish it even though I’m already nearly 300 pages in.

This habit was a complete and total failure. The plan was to go through a shutdown routine at the end of each workday. I did it about 40-50% of the time for the first half of the month, and basically didn’t do it at all in the second half of the month. I do like the idea of a shutdown routine, and back mid-shutdown I found it something I was pretty good at sticking to. However, at this point the kids are back in swim which means I have to leave promptly at the end of the workday and that has scuttled my efforts to complete a shutdown routine which doesn’t really align with dropping everything and taking off right at the end of the workday every day.

I’d dropped this habit for August, though I imagine it will resurface in some other format at some point in the future.

So here’s the reason I think everyone should keep a habit journal: keeping a habit journal and then looking back each month provides an opportunity to evaluate what’s going well and what’s not going very well, and that enables me to make intentional adjustments.

Looking back on July it’s apparent to me that the shutdown routine just isn’t working and I think I understand why. I’m also aware that I’m really stretching thin on reading. I probably need to finish the chapter I’m on now and move on to some different reading material that’s more engaging (to me personally), otherwise I’m afraid I’ll burn myself out the way I did while reading Jordan Peterson’s 12 Rules for Life a year ago and end up not wanting to read anything for the next 3 months.