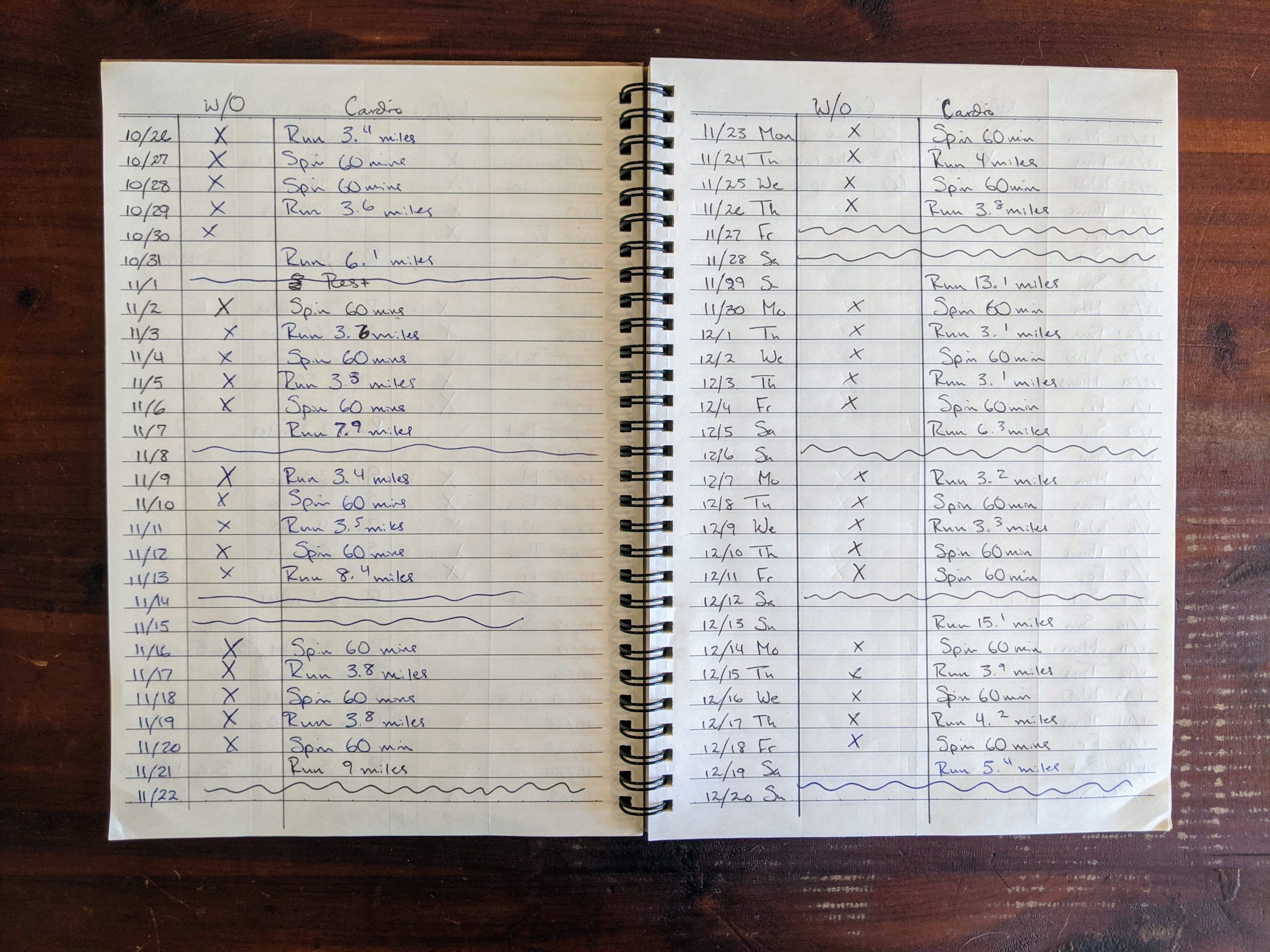 Back on November 2nd, I started getting up an hour earlier with the goal of getting in 3 runs per week more consistently. As of today, I’m halfway through my seventh week of this new routine and this seems like a good point to reflect back on how things are going.

The basic idea here is that I’ll be more consistent with my running if I build it into my normal weekly routine. Prior to November 2, I didn’t have a routine. I just knew I wanted to run twice during the week each week, and once on the weekend. I was pretty good about getting in the weekend run because my weekend schedule tends to be fairly flexible, but I was pretty inconsistent at getting in the other two runs.

The problem was that I just tried to slip in those two “during the week” runs wherever they happened to fit, and quite often they just didn’t fit.

So on November 2 I took advantage of the time change to start getting up an hour earlier so that I could get my runs in first thing in the morning.

Yes. The picture up top is my exercise log. If you look carefully you’ll see 3 runs every single week. Every single workday since November 2 I’ve been up at 6 AM and either gone running or spent an hour on my Schwinn IC3 exercise bike. I’ve also gotten in a long run every weekend. I’m batting 1.000 on my running routine ever since I made this change.

It sucks. Getting up at 6 AM to run in the dark and freezing cold sucks. We just passed the winter solstice and during my last run the sun hadn’t even thought about peeking over the horizon when I finished running.

It’s also rewarding. I’m really pretty proud of the fact that I’ve been up at 6 AM and have either gone running or spent an hour spinning every workday since November 2nd. It feels pretty badass to be up and cranking out the miles when most of the folks around me are still in bed.

I also know that if I can stick to this routine now, during the darkest, coldest part of the year, that it will only get easier. In the summer, these 6 AM runs will be beautiful.

What Keeps Me Getting Up?

That’s a great question. Motivation is a really hard thing to muster. It sort of bubbles up unexpectedly and dissipates when you need it the most. If you rely on “feeling motivated” to get up and going, you won’t get much done.

So what keeps me getting up at 6 AM? There are a few different things that keep me going.

While none of those factors would be enough on their own to get me out of bed at 6 AM every weekday, taken together they do the trick.