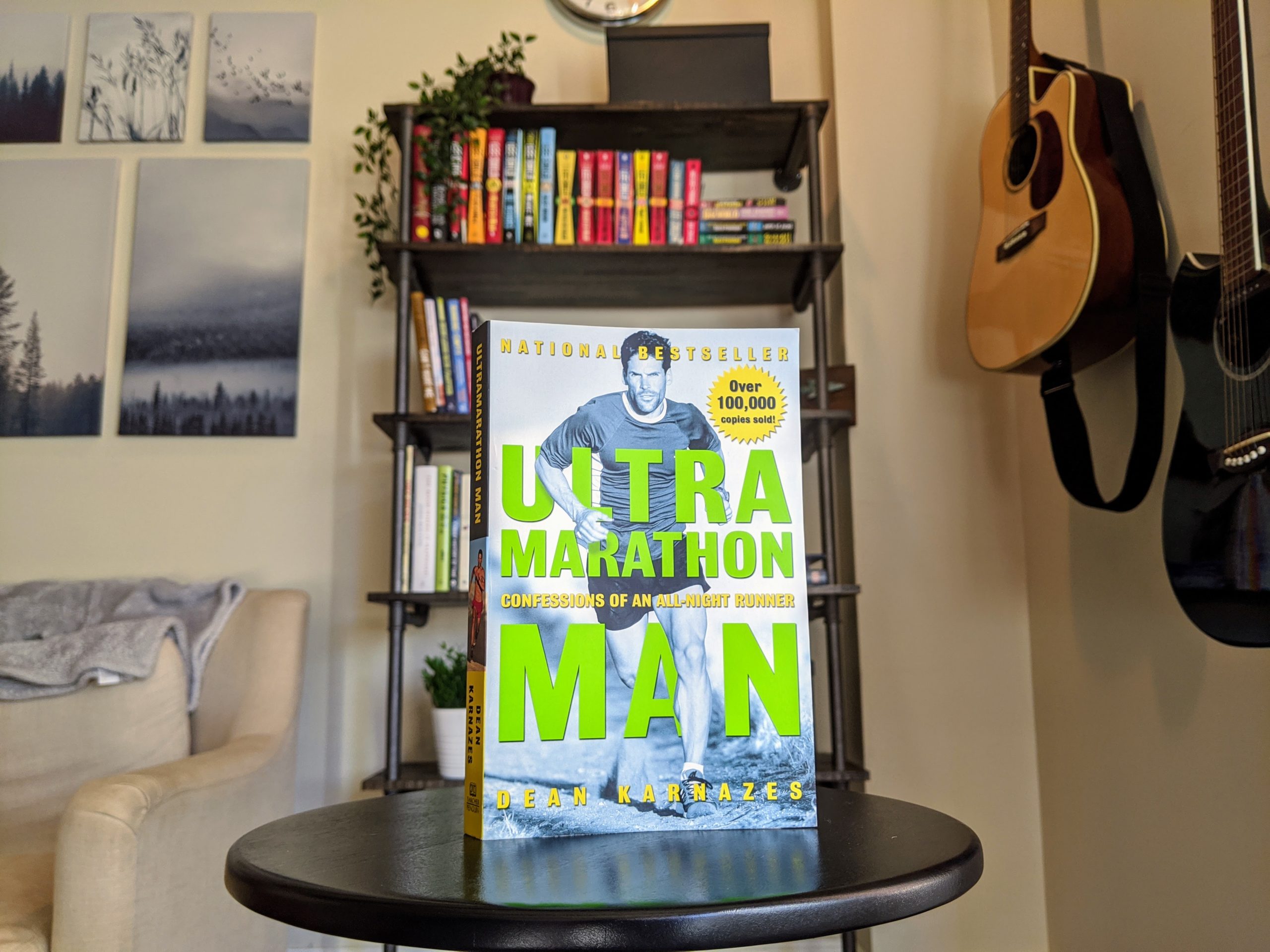 Ultramarathon Man: Confessions of an All-Night Runner, by Dean Karnazes, is an inspiring book in which Karnazes explains how he became an ultramarathon runner as told through the lens of several of his most impressive feats of endurance.

The book is part memoir and part autobiography. Published in 2005, the narrative unfolds basically in chronological fashion, beginning with Karnazes’ childhood in Southern California and ending with the story of Karnazes’ solo-run of The Relay in 2004.

At the same time, the book is a lot more than a chronological retelling of facts. The entire book is couched in answering the question: why run at all? The book opens with this question being posed to Karnazes by a pizza delivery man handing over a pizza in the middle of the night to a mid-run Karnazes, and closes with Karnazes answering the question head-on in the final three paragraphs (which includes twelve different statements that start with “I run to/for/because…”). It’s in this sense that the book is a memoir; in it Karnazes explains the role running and endurance events play in his life.

Is the Book Any Good?

The book is incredibly inspiring and entertaining. Karnazes has done some really crazy stuff. From running far more than 100 miles in one go to running a marathon at the south pole, Karnazes exploits make for riveting reading.

Karnazes is a very capable writer. I’ve read several books written by ultrarunners, and if you weigh them based purely on the professional caliber of the text, Karnazes’ book is second to none. Setting aside the readability, Karnazes is also a very entertaining writer. A simple retelling of facts can be unreadably dull depending on how you present things and this book is never dull.

Let me say this: I’ve never run an ultramarathon. As of today (Sept 30, 2020), the longest I’ve ever run in one go is 21 miles. So what I’m about to say I say with tremendous humility and only in comparison to books I’ve read by other ultrarunners, not in comparison to myself.

With that caveat in place, I did find the book to have a bit of a self-important air in various places. What Karnazes has accomplished is impressive, no doubt. However, to read the book you’d think that what Karnazes has done has been unmatched by anyone else in human history, and that’s not true. There are many other elite ultramarathon runners that have done similar and even more impressive things, for example: the Badwater Quad and literal run across America by Marshall Ulrich and Pete Kostelnick’s Ke2Key project in which he ran from Alaska to Florida self-supported.

That doesn’t mean that Karnazes hasn’t earned some bragging rights. He absolutely has. I just feel that he presents his feats as if they are unparalleled, which they are not. They’re fairly standard within the ranks of elite ultramarathon runners. What Karnazes does have going for himself is that he’s one of the most polished writers and savvy marketers in the ultrarunning world.

My second gripe with Karnazes is that some of the details in the book just have to be embellished. The worst case of embellishment is when Karnazes claims to have crawled most of the last mile of the Western States race, a mile that included some sort of inspiring pep-talk with a random passerby. The most cringe-worthy section is on page 152:

…I got my arms and legs in place and then simply followed his instructions: I began crawling up the road. I could hear Dad trying to control his crying as I dragged my body off into the distance.

There’s quite a bit of this throughout the book. I suspect that the spirit of the encounter is accurate. Karnazes did probably fall and struggle to get back to his feet. His father did probably shed a few tears watching his son struggle like that. But to suggest that he crawled most of the final mile strikes me as unbelievable, and in a few cases such as this one things are just way too over the top.

I get it. Karnazes is writing a book that’s intended to be inspirational. This isn’t a legal document and at no point does Karnazes claim that every detail is 100% accurate. He’s taken some artistic license in the retelling to keep the reader engaged. I’m not crying foul, but I am saying that some of the dramatization goes a few steps too far for me.

Probably. Ultramarathon Man is well-written and inspiring. What Karnazes has accomplished is impressive and admirable, and he just seems like an all-around great guy: kind, generous, and a great husband and father. The book is engaging, and if you’re anything like me, you’ll finish it in just a few days. If you’re remotely interested in running or feats of human endurance, it’s well worth your time.